I used to be kind of a literary snob. On the outside I was a dutiful English major, reading the classics, compiling lists so I could fill in embarrassing gaps in my knowledge of THE LITERARY CANON. I did have embarrassing gaps, though. I still regret that I didn't take a Shakespeare class in college. I didn't read Macbeth, for example, until I had to teach it to my 12th grade students. And my understanding of Restoration poetry is unconscionably thin. The horrors! Also, I had a weak resume in the Henry James area until I had to teach several of his books to my tenth graders.

Weird digression: I was carpooling with a group of sorority sisters to take the GRE in English. On the way one of the girls was talking about some Henry James book she'd recently read. The main character's name was Isabel Archer blah blah blah. Less than an hour later I was taking the test and came to a question about that character in the novel Portrait of a Lady, and because of that conversation, I knew the correct answer. This sorta felt like cheating to me because I hadn't read the book.

But I got over it.

Another digression: one of my most humiliating book-related experiences happened when I was teaching at an all-girls private school. We English teachers got together to discuss divvying up our 12th grade students' independent reading projects. I was the newby and had no input making up the list of approved novels. Someone read off the list and we were supposed to call out which books we'd read and could comfortably teach. She got 3/4ths of the way through and I still hadn't called out. (I hadn't read any of the books. I hadn't even heard of some of them.) One of the teachers smirked at me and said, "Well, what HAVE you read?"

Gulp. Didn't reading The Scarlet Letter 25 times count for anything?

The irony is I was just as book-snobby as Smirky Woman. I took seriously my English major and later my English teacher persona. In my spare time I'd pick up classics I'd missed along the way or get my hands on new "literary" writers. I worked in a bookstore (an awesome place in Memphis called Davis Kidd) when I was in grad school, and I spent every extra dime on books, loving that 40% discount. At that bookstore I was in charge of the Romance section, of all things, and I not-so-nicely mocked the women who perused my section (behind their backs of course.) But now I am ashamed, and I think my encounter with Smirky Woman was Karma smacking me upside the head.

Because there has always been a secret trash-loving reader buried inside me. My first reading experiences were late nights poring over Trixie Belden books (as a ten year old) and later (as a teen) gorging on junk like Flowers in the Attic with a side dish of Cosmopolitan magazine. I admit that age 16 I even went through a romance novel phase (!)

I don't apologize for it anymore. I read what I like, and I believe there's a place for Twilight alongside Printz-award-winning books. The only qualification I have for books now is that they not be boring.

Which brings me to my proud addiction to the over-the-top, overwritten, but never boring, TV show Revenge. I started watching this glorious soap opera last year with my teen daughter and it quickly became our Must Watch show. The characters are beautiful. The setting (the Hamptons) is gorgeous. The plot is absurdly complex and often (unintentionally?) hilarious.

At the center is the bland Emily out to get revenge on every single one of the evil former friends of her disgraced and now dead father. The trouble is Emily herself often veers into evil territory with the lengths she goes to destroy these people. Sometimes I find myself actually feeling sorry for these miscreants after Emily is through with them. One episode last year dealt with a writer who penned a dishonest biography of Emily's father. Emily burned the guy's house down, starting by lighting the only copy of his new manuscript on fire.

I know it sounds ridiculous, and believe me I don't understand my attachment to this show either. Never fear, my English major self is on the case. Season Two begins tonight and I will be watching, doing my darnedest to analyze the appeal. All last year certain plot twists would jump out at me or particularly silly lines (See title of this blog post which refers to something Conrad said to Victoria. These two are the main recipients of Emily's wrath, but interestingly, they hurt each other far more than Emily does.)

This year I'm going to record this stuff, if nothing else, for my own amusement. If you're a fan of the show too, or you'd like to tune in and see my real-time take on it, sign on to Twitter. I'm @jodcase and I'll be tweeting with my daughter, #Revenge. I promise you, we will not be boring... 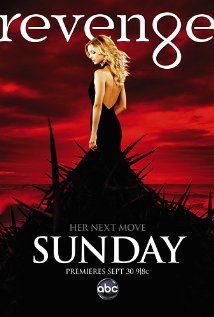