Two years ago I knew nothing about social media unless you count my Facebook page. But that was mostly to keep tabs on my kids. I annoyed them by peppering them with questions like: whose wall am I writing on? What IS a wall, anyway? And how do I turn some "friend" off when I'm tired of looking at cutesy pictures of her cats? The day my son showed me how to "hide" a person who annoyed me ranks right up there with the most satisfying experiences of my virtual life. Wow. Wouldn't it be awesome if we could hide people who ticked us off in real life too? But I digress. 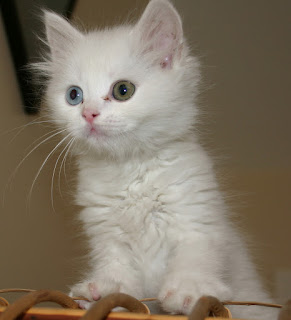 (cat picture. Cute. But sometimes I get tired of looking at them.)


My point is that I was a brand newbie to the online scene, and then I attended an SCBWI regional conference and social media was all everyone was talking about. Writers have to create an "online presence." You've GOT to have a website, a Twitter account, a blog. Needless to say, as someone who still had to ask my daughter to upload pictures for me on Facebook, I was a little nervous about tackling any of this stuff.

But I did, first by starting this blog. I called it On the Verge because of something one of the presenters at the same conference said. She knew so many really good writers--writers on the verge--who quit trying just as they were about to cross over. Well, no way would that be me! I knew in my bones that all my years writing were about to pay off, and this blog was my chance to give back, maybe throw out some helpful pointers to beginning writers. At the same time, maybe the blog would accomplish that other goal--of creating a buzz about my book(s) that would soon see the light of the publishing day.

I had an ulterior motive, is what I'm trying to say. What I figured out, though, was that I really like blogging. Probably because I like writing. Duh. But also because it gives me something I hadn't thought I needed: an immediate response to what I'm writing. Turns out that two years ago, I WASN'T just about to cross over. Deals came close and fell through. Rejections dribbled in. Or worse, I got no response at all. My agent quit the business. Last summer I came perilously close to quitting. I made my peace with the fact that my dream would likely never come true on this blog. And then I made my peace with it again. I got some nice responses to my posts. Some from wonderful writers I love, (like Sara Zarr!!!) gave me such a charge that I decided I would keep writing regardless.

Blogging ended up helping me, but not in the way I had assumed it would.

Social media, for me, is not just about creating buzz. This is such a nebulous term and is out of a writer's control and anyone who tells you otherwise is probably the person sending out a constant tweet-stream of BUY MY BOOK, the virtual equivalent of going door to door selling vacuum cleaners (or anything, for that matter). I don't know about you but when I see them coming up my walk, I want to turn the lights off and pretend I'm not home.

What I'm figuring out is that my virtual actions need to be as genuine as my real ones. I tweet when I want to not because I must get in my 5 tweet a day quota. I share articles on my Facebook author page that I think might interest other writers and readers. I'll comment on blogposts that move me or provoke an honest response. I've made connections this way that feel real to me and remind me that I am part of a larger community of writers and readers and the only way to "meet" most of these people is online.

A few fun things I've signed on for lately (because I want to):

1. I was asked to contribute posts for an awesome group blog called YA Outside the Lines, a blog created by my new role model Holly Schindler.

2. I've resurrected my Goodreads account and I am so glad I did. I love seeing what others are reading and I'm having fun scrolling through my friends' reviews.

3. My daughter and I made a pact to "live tweet" our responses to our favorite guilty pleasure, the over-the-top soap opera-y drama Revenge. It starts next Sunday, fellow Revengers, so follow us and tweet back.

4. I signed on to be a stop on Mike Mullin's Ashen Winter blog tour.

(I must confess that when I agreed to do this, I didn't know exactly what a blog tour was. My motives were sorta self-serving. I loved Mike's first book and was eager to read the sequel, so that was genuine, but truthfully, I figured that if I signed on, I'd learn more about blog tours and I could get pointers on how to set up my own. Apparently, a blog tour is when an author virtually visits a bunch of blogs. They happen right around the time a book is released to, you guessed it, create buzz. What's cool is each "stop" is a little different. There are book reviews, of course, but also author interviews, character interviews, and other posts on topics related to the book. Sometimes there are prizes.

Confession number 2: I thought I was supposed to write a post called "What to Eat in the Wild" (Mike's book is a bleak, nail biting dystopian nightmare and let's just say the food pickings are slim.) I was such an eager beaver that I wrote my post months ago, but found out last week that MIKE is the one who's writing the post and I'm supposed to have him guest blog. So, yeah. Forgot to read the fine print there. Lesson learned.)

Yes, I have trekked a loooong way over the past two years through this new virtual landscape, but I am the first person to admit I still have miles to go.

PS. Tune in for Mike's post on Oct. 2, my official stop on his Ashen Winter tour.

PSS. Tune in for my post on the same subject soon, because I don't think Mike will mind a double burst of buzz.