In Which I Discover an Awesome Community of YA Book Bloggers, Learn What Kind of Writing Implement Jane Austen Used, and Share Two Books I am Looking Forward to Reading


Lately, I am getting the biggest kick out of doing research on marketing strategies for my book, something I never thought I would say. Only a few months ago it was sort of driving me crazy. There just seemed to be soooo many promotional things I should be doing. Tweeting and Facebooking and blogging, etc. Sometimes I wanted to crawl into a cave with no internet access and curl up with a notebook and a quill and pretend I was writing back in Jane Austen's time. (Note to self: find out if Jane Austen used a quill.)

It doesn't help that I have a very strong anti-technology streak at my core and it is hard for me to learn new things related to technology/social media (which seem to be changing by the minute). Examples that make my kids mock me:

I don't  know how to use the TV remote control. I'm embarrassed to admit how many times I've had to call my daughter for help in turning the TV on. And don't get me started on my cell phone. I have taken literally hundreds of pictures of my own hand because I still don't understand how the camera feature works on my phone.

Anyhoo, I am a dutiful rule-follower, so if people tell me I must "get on Twitter," then no matter how anti-tech I am, I'm going to get on Twitter, damn it, and tweet my little heart out. And if, while on Twitter, I notice that there is this huge, very cool blogging community of avid YA readers, then I am going to follow all of those bloggers to see what they are up to. What books are they reading? What genres do they like? What issues are they talking about with each other? I started reading their blogs as "research," but quickly got addicted, and now could conceivably spend most of my day jumping around from one blog site to another.

Which is how I discovered the meme WoW. (side note: I just learned what meme means)  WoW stands for "Waiting on Wednesday." Every Wednesday book bloggers share the book that they are most looking forward to reading and everyone weighs in on the choice. I LOVE this idea and can't believe I didn't know about it until recently. I think that the official way to be a WoW participant is you've got to sign up on the Breaking the Spine blogspot and add your blog address. I may be breaking the rules here by NOT doing that, but I can see that I don't have the same level of commitment these uber readers have and I won't be able to post a WoW every week. I hope the Breaking the Spine blogger forgives me, but I'd like to share one--well, really, two books that I am eagerly awaiting.

So without further ado:

It’s been four years since I slept, and I suspect it is killing me.

Instead of sleeping, Parker Chipp enters the dream of the last person he’s had eye contact with. He spends his nights crushed by other people’s fear and pain, by their disturbing secrets—and Parker can never have dreams of his own. The severe exhaustion is crippling him. If nothing changes, Parker could soon be facing psychosis and even death.

Then he meets Mia. Her dreams, calm and beautifully uncomplicated, allow him blissful rest that is utterly addictive. Parker starts going to bizarre lengths to catch Mia’s eye every day. Everyone at school thinks he’s gone over the edge, even his best friend. And when Mia is threatened by a true stalker, everyone thinks it’s Parker.

Suffering blackouts, Parker begins to wonder if he is turning into someone dangerous. What if the monster stalking Mia is him after all?

2. In the Shadow of Blackbirds by Cat Winters--release date: April 2 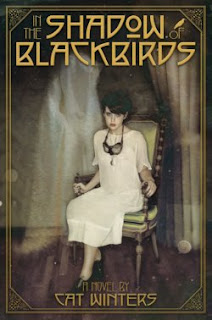 In 1918, the world seems on the verge of apocalypse. Americans roam the streets in gauze masks to ward off the deadly Spanish influenza, and the government ships young men to the front lines of a brutal war, creating an atmosphere of fear and confusion. Sixteen-year-old Mary Shelley Black watches as desperate mourners flock to séances and spirit photographers for comfort, but she herself has never believed in ghosts. During her bleakest moment, however, she’s forced to rethink her entire way of looking at life and death, for her first love—a boy who died in battle—returns in spirit form. But what does he want from her?

Featuring haunting archival early-twentieth-century photographs, this is a tense, romantic story set in a past that is eerily like our own time.

And now, dear readers, what books are YOU waiting on?

PS. In case anyone wants to check out some of the awesome blog sites I've been lurking around, here's a (very tiny) sample:

City of Books
Icey Books
Hobbitsies
I Like These Books
Confessions of a Readaholic
Good Books and Good Wine
Actin' Up with Books
Books, Bones & Buffy
Some Like It Paranormal
Mundie Moms
Books over Boys
Two Chicks on Books
Literary Meanderings

PPS. Yes. Jane Austen DID write with a quill pen. Thank you, Internet!