One thing I've noticed is that book signings these days tend to have titles. Recently, I've attended a Fierce Reads Tour and a Dark Days Tour. Also, a Good Girls/Bad Boys in YA Fiction Tour.

For my "tour" I am toying around with this title: "Places Where Jody Lives or Once Lived and Knows Some People Who Live in Those Places and Therefore Might Show Up" Tour. Whatdaya think?

(For the record my tentative schedule for the "PWJLOOLAKSPWLITPATMSU" Tour is as follows:

Memphis, TN: Saturday, Oct. 26 at 2:00 at The Booksellers at Laurelwood

Make a note family and friends! Also, peeps in CT, don't worry, you are on my radar next...)

I like going to author book signings and as someone who used to work at a bookstore, I have attended many. My favorite, back in those days, were cookbook authors. Those signings usually included food, and if we bookstore clerks waited patiently, sometimes we got to have a taste of sample recipes.

I've been to book signings (Louis Sachar, Sue Grafton, Jane Fonda, Madeleine L'Engle, Veronica Roth) where the line snaked out the door. Also, I've witnessed a few book signings as a bookstore clerk where no one showed up except the bookstore clerks. I will kindly not mention who the authors were for those...

The most crowded book signing I've ever attended was a children's author, Mary Pope Osborne of Magic Tree House series fame. My daughter, at age seven, was a HUGE fan, and I promised her we'd buy Osborne's latest book and get it signed. But, I almost reneged on this promise when we pulled up to the overflowing bookstore parking lot (and this is the huge bookstore Joseph Beth in Lexington that has two stories and space for like, 100,000+ books). We waited in line for two hours to reach Mary Pope Osborne, and I must say she was very sweet, taking a minute to smile and chat with my daughter before continuing on with the 100 people behind us.

There is something VERY cool about meeting and chatting with the author of your favorite book. I burst into tears when I had the chance to meet one of my favorite childhood authors Madeleine L'Engle. And I was similarly tongue-tied when I meet Barbara Kingsolver and Meg Rosoff.

The idea that people might wait in a line to get my book signed kinda freaks me out if I think about it too much.

But then it hit me. I've had some practice signing books before...

Twenty three years ago, when I worked at Davis Kidd Bookstore (now Booksellers at Laurelwood) in Memphis, I got roped into doing a signing. Every Saturday there was a children's story time at the bookstore and for some reason, this one particular Saturday, they decided to add a book signing by a costumed character into the mix. 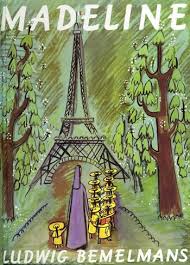 I played the costumed character Madeline. I remember waiting in the back room as a clerk read the story. You may remember that the book begins like this: "In an old house in Paris, that was covered with vines, lived twelve little girls in two straight lines... the smallest one was Madeline."

After she finished reading, the clerk said something like "And now we have a special guest with us..." That was my cue to walk out.

I was wearing a ginormous head mask, which turns out is frightening to young children. Also, it was false advertising because I was not "the smallest one" those kids had been picturing. A few of the children burst into tears--the terrified kind, not the joyful kind.

Some grabbed my legs and almost tripped me. (Fun fact: those ginormous head masks allow no peripheral vision. You can only see out from a 5 inch square directly in front of you. Luckily, the bookstore clerk figured this out quickly and wrapped an arm around me and led me forward before I could trample anyone.)

The signing went fairly well after the crying subsided.

I sat at a table, face hidden and sweating inside my ginormous head mask, and the kids lined up and thrust their books in front of my eye holes.

I nodded and chatted with them and signed

Twenty three years later I will sign my actual name. Also, I will try not to trip over anyone.