Books that Sucked Me in and Blew My Mind

Lately, I have been a good book reading roll, which is a nice roll to be on when you are NOT on a good writing roll. During the day I (mostly) struggle to meet my writing goals, but at night, I know I can curl up with a great book and all is right again in the world. You would think it would not be satisfying to read a good book during the time you fear you are writing a bad one, but you would be wrong.

It's actually the opposite.

Reading "bad" books makes me tired. Each page is a chore. I was reading a book that shall not be named for my book club. The first night I picked it up, read two pages, and fell asleep. The next few nights the same thing happened. I think I got up to ten pages and finally set it aside.

Compare that to how I felt when I was reading Courtney Summers' This is Not a Test. From the very first page, I was sucked in, and then I was turning pages--but not so fast that I would miss anything. Here's the premise: it's the end of the world. Zombies are attacking the town and the few kids who've managed to evade death/zombiehood hole up together in the local high school. Now, I know what you're thinking: zombies? another end of the world book? Bleh. But this is the brilliant Courtney Summers we are talking about. Turns out the main character had been planning to kill herself that morning and the end of the world feels like a relief.

There is nothing cooler than a thought-provoking page turner and this one had me thinking long after I closed the book: What's the point of living? How do you fight for survival when you don't want to survive? Can a damaged girl on the verge of giving up, find hope in the worst of circumstances? Read a book like this and you are reminded why you write in the first place.

I am not a big graphic novel fan. I should amend that to say I haven't read many graphic novels. If you are new to the genre too, here is a good one to try: Boxers and Saints by Gene Luen Yang. 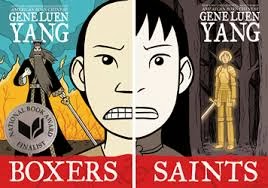 It takes place during the Boxer Rebellion in China in 1898. It's actually two books, companions, that tell the same story from characters on the opposite side of the war. First, we meet Bao in Boxers and sympathize quickly with his plight. He is one of the Chinese peasants who rises up against the foreigners, many of whom happen to be Christian missionaries. In Saints we see the struggle from the other point of view, a girl named Four Girl, who is drawn to Christianity, but not for reasons you'd expect. When the two meet, it is a moment of horror and heartbreak that I don't think I have ever experienced before while reading a book.

I have been a big fan of David Levithan ever since I read Everyday. His latest, Two Boys Kissing, is stunning and ground breaking. The main story is two boys decide to break the record for the world's longest kiss. But there are other stories too, of boys going on their first date and a boy who is repulsed by his own sexual identity and contemplating ending his life. The narrator is a Greek chorus of men who have died from AIDs, looking down at the events with sympathy and pity and fear and joy.

I've seen many reviews of this book, but none have discussed the thing that stood out most to me: the most perfect bit of writing I've ever seen--that should be given to any human who ever contemplates ending his own life:

This book will stay with you long after you close it.

The Knife of Never Letting Go by Patrick Ness is KILLING me. 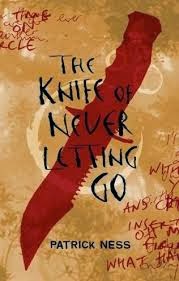 I've been listening to it on audio and let me say here that audio books are art forms in and of themselves. Whoever is reading this one is awesome. He does various voices, including a dog, and has me alternately laughing and almost crying. Confession: I have not finished listening to this book. I can't think of a time when this has ever happened to me--that I love a book and am completely caught up in it and yet I cannot bear to pick it up again because I am so invested in the characters and so worried about what is going to happen to them.

Brief synopsis: it's a weird world where there's a small town populated only by men. All the women died after some kind of alien virus and the men caught what they call The Noise, the ability to hear each other's thoughts. It's driven most of them to suicide, but the few who are left, are struggling, and this is the world that Todd Hewitt has been born into. When we meet Todd, he's walking around with his dog Manchee, annoyed and bored and so tired of listened to the noise. He can hear the dog's thoughts too but that's not very exciting. The dog mostly says stuff like, "Pooh, Todd, pooh."

Everything changes for Todd when he meets a girl, a girl whose thoughts he can't hear, and that pretty much starts Todd (and Manchee) off on a non-stop nail-biting journey where Todd realizes fairly quickly that everything he's been told about himself and his world is a lie.

Oh my God, I love this dog. Anyone who has read this book, please please please tell me that nothing happens to him. (Shoot. I know something bad is going to happen to him. Which is why I am afraid to keep listening.)

And last, but definitely not least:

This novel was one of the finalists for the Morris, (the award given to best YA debut novel), and deservedly so. I finished reading it a few weeks ago and I still can't stop thinking about it. It's the main character Evan--how real and tormented and complex and floundery he is, but it's also the world, this small town in Minnesota, a lake with an island that no one is allowed to visit, and the group of kids that become Evan's first friends.

If you've heard about this book, what you've probably heard about is the edgy topic at the core: the um, sex and violence. It's true. The book is edgy and dark and kind of in your face about it. When we meet Evan, he's settling into yet another school (his single dad--who reminds me of the single dad in September Girls, another great book--moves around a lot, and so Evan never gets to stay in any place too long.) Evan's coping mechanism is to not get too close to anyone, unless you count hooking up with a string of  "easy" girls.

This strategy backfires in a big way when Evan is beaten up by a conquest's ex-boyfriend, beaten up so badly he ends up in the hospital. His dad takes him back to Minnesota, the dad's childhood home, to recuperate, and it is a long period of recuperation for Evan--grappling with a physical recovery and post traumatic stress, but also struggling with guilt and the role he may have played in the events leading up to his attack. There's more here too about father and son relationships, and relationships between men and women, and the true consequences of violence and of sex that may make some readers uncomfortable, but made me so very grateful that a book like this exists to ask the questions.