Every day two battles are fought and won in my house.

Battle # 1 is fierce and loud and stressful and contains lots of slobber and flying hair.

Battle #2 is fought by my dog.

So if you have been following my blog for a while, you may recall that after my son went off to college I became a reluctant and later a ridiculously adoring dog owner. My Zooey is the perfect writing companion. She naps by my side for two to three hours at a time, and then she demands a walk, usually at the moment when my eyeballs are burning out of my skull from staring at my computer screen. Zooey is the reason I change out of my pajamas each day. She also has saved me from becoming a sad, partial empty-nester. (I suspect that without Zooey, I would sob every time I walk past my son's empty bedroom.) She has without a doubt saved my daughter from my helicopter mom tendencies. Now those helicopter blades are hovering around Zooey.

How do we keep Zooey from jumping on visitors? How do we teach her not to dig a giant *&^ hole in the center of the backyard? What can we do to keep her from eating sponges and kleenexes and computer mouses/mice? How can we help Zooey and the crochety yet beloved old cat get along better?

And the big one: how do we stop Zooey from losing her freaking mind every single day when the mailman comes to the door?

My son on break from college figured out the answer to this one.

The Zooey vs the Mailman War has been going on for about a year and a half now.

The battle begins when the truck first putters down the street. Zooey is fast asleep, curled beside me. 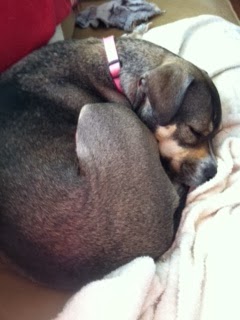 She recognizes the truck sound--which is somehow different from any other vehicle sounds--and she is UP and ready for battle. 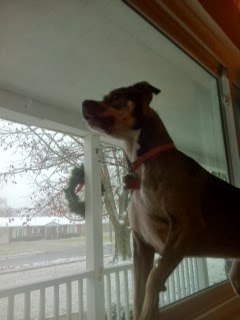 There's five minute tense growly period between when the mailman steps out of the truck and takes his sweet time walking up the street toward our home.

The moments when the guy places his foot on our front porch and passes by the picture window are the heat of the battle, with Zooey in full-blown attack mode, splattering spittle and barking like a wild beast. Time slows. The mail box clicks open. Zooey races to the front door and throws herself against it. The mail box snaps shut. Zooey licks herself furiously, does a victory lap around the house, and jumps back onto the couch to continue her nap.

My son watched this battle take place every day when he was home on break and we'd marvel at the intensity and lunacy of it. On his last day home, we watched the battle unfold again and my son announced that he'd figured it all out.

Zooey is the type of dog who will bark when anyone comes to the door, but as soon as that person steps inside, she sees that the person is a welcome friend and taking a cue from us, she greets them (by jumping on them--I know, not a good dog trait. We're working on it)

But, the mailman is NEVER INVITED INSIDE THE HOUSE.

In Zooey's mind he truly is the enemy. Every day, however, the man has the audacity to drive down our street and waltz right up to our door. Zooey's barking, her brave counterattack against the window, is the only thing that keeps the enemy from gaining entry.

And it works! She wins the battle every single day. The mailman retreats. Zooey has completed her mission. The only solution, my son said, is to invite the mailman inside. (He may be right, but at this point, I don't know if I want to risk the mailman's life to test this hypothesis.)

Okay, you may be wondering at this point what Battle # 1 is.

If you have been following this blog for a while or even for the past month, you may have noticed that it's a daily struggle for me to sit down each day, open my computer file, and get to work. I've written about my struggle here and here and here, in case you want a recap. Apparently I have to learn over and over again that the only solution is to write. It never gets any easier. Regardless of how long I have been writing, despite the fact that I have learned the lesson, that I know LOGICALLY that each day is difficult, somehow my hesitance to get to work still surprises me.

Writing, many days, feels like a battle. A battle against self doubt. A battle against laziness. Steven Pressfield does a much better job than I talking about this in his brilliant little book The War of Art. (This is a must read for any writer struggling to do the work, by which I mean EVERY writer.) Pressfield calls it the battle against Resistance.

But like Zooey I fight my battle every day. I spring onto the back of my couch and hurl myself against the plate glass window, drool and hair flying. And at the end of the day, I snap my laptop shut, secure in the fact that I have chased that demon off.

For the record, this day I have successfully beaten back Resistance 18 days in a row. I sign off now to fight the battle of DAY NUMBER 19.