Writer's Block Knocks Me Down. But I Get Up Again.

I didn't used to believe in Writer's Block. I was doing a book talk somewhere or a school visit and during the Q and A a person asked me what I did to combat Writer's Block and I said, with a straight face and totally meaning it, that I did not believe in it. Then, I probably laughed. Ha ha. Writer's Block. Pshaw. Never happened to me before. Unless you count a few false stops and starts. And those weren't such a big deal.

And then I came down with the affliction. Yes, Virginia, I am here to tell you that Writer's Block is real and I have been suffering from it, acutely, for the past six months.

The past six months I have also been promoting the heck out of my first book. Coincidence? Probably not.

Here's what my writing life was like BEFORE I had a book on the bookstore shelves:

I know it was like this for me because I can look over old blog posts--the first two years especially. The posts are a string of wondering and worrying and whining and complaining. Figuring out my process. Absorbing rejections. Making peace, finally, with the idea that I might never be a published writer.

In the meantime I went to writers' conferences and retreats and I heard other writers talking about similar struggles, and the common denominator, the mantra, in so many words, seemed to come down to: Keep writing. Trust the process.

I believed it even though I hadn't actually seen it work. I trusted the process--trusted that I would get better at writing if I kept at it, trusted that plotholes would work themselves out if I fiddled with them, trusted that if I kept submitting, eventually something would click.

In that very long time between when I finished my "first" book Thin Space, I wrote four other books. I had my mostly bad writing days and my rare good ones. I had my tricks for getting started and sticking with it and checking off goals, and I patted myself on the back that I was getting better, that I knew what I was doing.

Here's what happens now when I write:

It's EXACTLY the same as the list above. It's hard to sit down and begin. The initial words come out sucky. Doubts churn around in my head. But everything is amped up exponentially. Instead of worrying that no one will ever read what I'm working on (which I DO worry about, obsessively) I also worry about future readers comparing this new thing to Thin Space. I imagine meh Goodreads reviews and weirdly jouncing around Amazon ratings. And a whole bunch of other stuff that I have no control over.

I keep writing, but I feel like a fraud. This isn't a frozen pool I'm chipping away at. No, it's a mucky swamp and all I can do is descend into it each day and try not to suffocate. 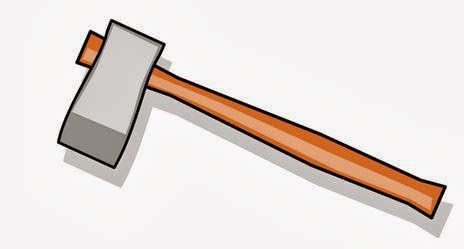 Writer's Block--at least as I have come to understand it--is not the inability to write--I can always string sentences together, I assure you--it is the inability to fall into that lovely deep dark pool and lose yourself in a story. It's the fear that you've lost whatever it is that you don't even understand you have. It's staring at a blank page and seeing that frozen pool and holding your axe and not having the energy to swing it anymore. It's the terror that you will never see the dark pool again.

But before I depress whoever happens to be reading this (and myself), I want to remind you (and myself!) that I know the solution.

You keep writing. You trust the process.

So that's what I've been doing for the past few months. I wrote and worried and flailed around in the swamp. Until finally I had a few days of chopping ice. And yesterday, for a glorious moment, it happened.

I forgot about twitter and Goodreads ratings and emails and hilariously dirty bathrooms, and the page disappeared. It was only for a little while, but there it was--the dark pool shimmering and gorgeous and right in front of me.