Don't Know Much About Canadian Geography


Last weekend my husband and I dropped our grown son off at the airport at 4:30 in the morning, said one final goodbye as he tromped off blearily, yet excited, weighted down by multiple backpacks, to embark upon his new life on the opposite side of the country,

and then we got back into the car and my husband asked me if I was going to cry and I said, No.

Maybe I was tired because it was 4:30 in the morning or maybe I'd already made my peace, in a way, with the goodbye to our son--it's not like I didn't know it was coming--and it goes without saying that I am thrilled for him--

Or maybe I was a little excited myself about the adventures that lie ahead, for my son, of course, but also for my husband and me,

and I was looking forward to an actual adventure-- the spur of the moment road trip that my husband and I decided to take that very day.

Neither one of us had ever been to Niagara Falls and the place is less than six hours away and the thought of returning to the dark quiet empty nest house (if you don't count the dog, the cat, the fish, and the possibly enchanted plants in the garden) just seemed kinda depressing to both of us.

So off we went.

But first a pit stop at the airport McDonalds for much needed coffee. And then, off we went!

We went to the Canadian side of Niagara because we had heard from various people in the know that it was the Better Side. Whatever that meant. Something funny about this trip is how unplanned it was.

My husband, if you don't know the guy, is a big-time planner-- (it's his literal job) -- and his planning abilities always spill over into our vacations. I'm talking excel spreadsheets of sights we will see and meals we will eat. Wondering what the restaurant reviews are for that pizza place in San Francisco? My husband can tell you.

My role, on these vacations, is to show up and go with the flow, as we follow his meticulously crafted itinerary.

For some reason though, (my husband's own empty nest melancholy?) there was no meticulously crafted excel spreadsheet for this Niagara trip. 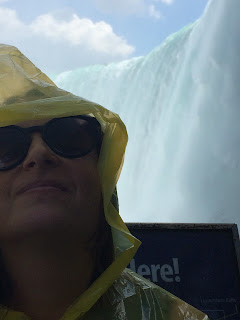 We were throwing caution to the wind, driving by the seat of our GPS, caught in a bit of traffic crossing the Canadian border because my husband had not googled the various border crossings to compare traffic lines ahead of time!

But somehow we managed to make it over to Canada, chatting as we did about how little we knew about Canada and Niagara Falls. For example, I did not know what province we were in (Ontario), or that there are two Great Lakes in the region (Ontario and Erie).

That the water of the Niagara River is mesmerizing as it flows over the Falls. You can go down into a tunnel and feel the vibrations as it crashes over the rocks. And when you take a boat tour on the river, you'll be close enough to the churning falls to get your hair wet.

I know this because my husband and I did another completely spontaneous thing: we signed up for a bus tour. This is something true Planners NEVER do. I mean, really, why would you pay a tour operator to cart you around from site to site when you could research all of this stuff in advance and cart your own selves around?

We loved our tour guide and we loved being carted around and told what to look at and where to go. We also loved skipping all the long lines and moving with our tour group ahead of all the poor planning do-it-yourselfer-save money suckers people. 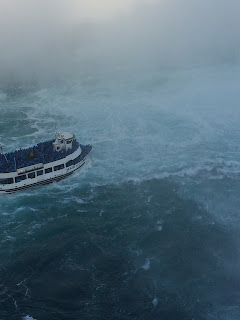 The only thing we had to do on the tour was make it back to the bus at the designated time.

Fun fact: We were the last people to make it back to the bus at the designated time. I don't know how this happened to such dutiful obedient rule followers as my husband and me. It was like we had lost our damn minds.

We also may have lost our minds the next day when at the spur-of-the-moment we drove up to a town called Niagara on the Lake, parked our car in the first lot we came to, walked ten steps and wandered into a shop where we discovered that a winery tour was about to begin,

and bought tickets to go on the tour, because what the hey? Why not drink 25 glasses of wine at 10 o'clock in the morning?

Oh my God, that was a fun wine tour.

Ontario, apparently, is known for its wineries. Something something about the climate, the air moving from the lake across the land and bumping into a hill or whatever. 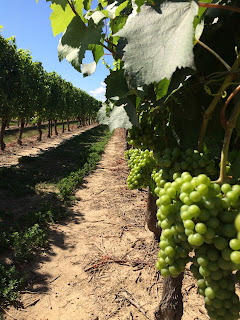 Oh, and there's this crazy good tasting wine called Ice Wine, where the grape growers wait until the grapes are frozen and then they pick them and do whatever it is to make wine with them.

Ice Wine is particularly tasty after you've drunk 20 other glasses of wine.

So tasty, in fact, that you buy a bottle and not realize until after you pay with the weirdo plastic-y Canadian money, that you just spent like, 75 dollars.

Also, the people on the wine tour think you're funny because they're all Canadian and you're the doofball American asking, wait, what lake is this again? after drinking the insanely expensive Ice Wine.

But then, on the bus ride back to town, they forgive you for your ignorance when you tell them that 24 hours earlier you dropped your son off at the airport so he could fly off to his new life on the other side of America. The woman on the bus next to you is your new best friend and she shows you pictures of her grandchildren,

and you think, holy moly, one of these days we're probably going to have grandchildren and won't that be a...(gulp)...fun adventure,

and then it's time to say goodbye to the lovely Canadians, and you and your husband drive back over the border, back to your quiet dark house and happy-to-see-you pets and enchanted plants

where you pour two glasses of Ice Wine

and you say, Cheers. 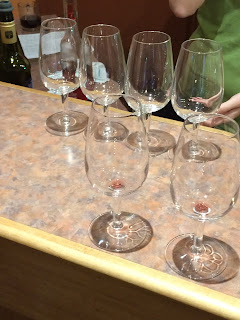