Playing Tourist in Your Hometown


I lived in Memphis for ten years before I ever visited Graceland. For the longest time I didn't even know where the place was exactly. One summer an aunt who was a huge Elvis fan came to visit and my husband and I took her over and ended up doing the tour with her, surprising ourselves by enjoying the experience.

The Jungle Room, let me tell you, is strangely fascinating. And the TV screens lining the walls of the Welcome Center, the ones playing endless loops of young Elvis singing and gyrating, are mesmerizing, and a good reminder why every year 600,000 tourists slap down 80 bucks a piece to check the place out.

I don't know why we waited so long.

When my husband and I lived in Lexington, Kentucky we did a better job of playing tourist. We took the kids out to the Horse Park and the horse races at Keeneland. We did the obligatory bourbon tour at Woodford Reserve (multiple times) and poked around the Mary Todd Lincoln House (once).

And when we moved to Columbus, Ohio we were determined to venture forth and see the sights. We did. Sorta. At least the biggies. The Columbus Zoo and the Franklin Park Conservatory. The Columbus Museum of Art and German Village.

And um, yeah. That's about it.

Now our kids are grown up and gallivanting around the world having fun adventures and it's not like we can drive up to Canada every weekend ourselves, so the other day we decided to play tourist in downtown Columbus.

What spurred this on was my husband's company took part in an American Heart Association Walk and he'd sign both of us up and we had to put the location for the Walk onto our GPS.

*Downtown Columbus, for the record, is literally 10 minutes away from where we live. 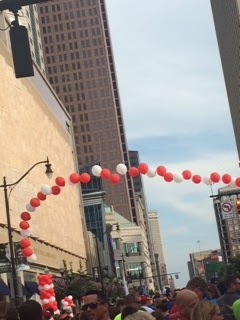 We parked and found the starting line and walked along with the thousands of other people through the blocked off streets of downtown and pretty much marveled the entire way. Who knew the path by the river was lined with so many lovely fountains? 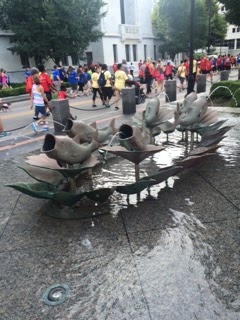 And huh, this is a really nice city, isn't it, honey? 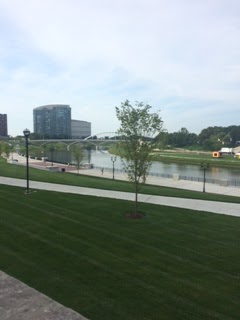 Anyway, the next day we started early and headed downtown again, already old pros at finding our ten-minutes-away-destination. There's a cool website we stumbled upon with downloadable maps of walking tours and a phone number you can call to listen to interesting historical and architectural and artsy tidbits along the way.

Looking like total touristy doofballs, we walked around with our map and a phone held out between us, on speaker, so we could listen to the fun, never-before-heard-of-factoids about the place where we've lived for nine years.

Did you know, for example, that Columbus used to be the buggy capital of the world? 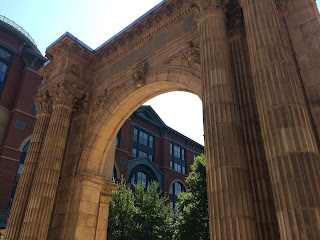 Or that there's a huge arch leftover from what was once the entrance to a train station (this was an amazing place that was torn down in the 1970's at night, so preservationists couldn't stop the demolition, and in the end, all that was left was the arch. Which is kind of a bummer, but woo woo, progress).

And in front of City Hall there's a three-ton, twenty-foot high bronze statue of Christopher Columbus given to the city by Genoa, Italy, because-- interesting fact: Columbus was named after Columbus. 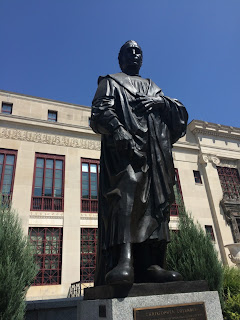 We ambled around for four miles, ending at the North Market, the old warehouse that's been converted into a funky farmer's market, where we bought fourteen dollars worth of macarons, planning to eat them later.

But then, changing our minds because we were playing tourist. And tourists eat fourteen dollars worth of macarons whenever they feel like it.