Marcie Colleen's an Author On the Verge

One of the many perks of being a Regional Advisor in the Society of Children's Book Writers and Illustrators is getting to meet writers and children's book industry people from all over the place.

Last Saturday, for example, the lovely Marcie Colleen, author of a multitude of soon-to-be released picture books and chapter books, was in town. Marcie's connection with an SCBWI chapter in California led to a connection with our local chapter in Ohio

which led to a group of us meeting for breakfast, where we had conversation with Marcie that was too inspirational not to share.

I say inspirational because Marcie has been plugging away writing children's books and pursuing publication for years and now her dream is just about to come true-- not one book on the shelf, but two, followed in the next year by two others, and that is only the beginning. 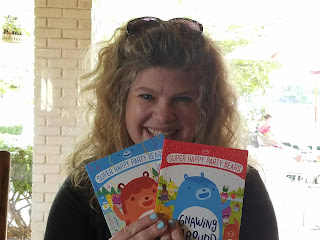 Inspirational too, because her road to publication was especially rocky, starting in the low moment when she lost her job in New York City.

Marcie's background is in theater education and during the height of the financial crisis in 2009, the theater industry was hurting like every industry. "I was afraid," Marcie told us, "very aware that I was living in one of the most expensive cities in the country and suddenly jobless with no solid prospects on the horizon."

Her mother's gentle reminder that she could always come home was a nice offer-- but also, a jolt of motivation.

Something I always find fascinating when I hear about fellow authors' journeys is how much of an interplay there is between hard work, determination... and luck. Marcie's luck came in the form of her husband's (then her boyfriend) publishing industry contacts. He knew Little Brown editor Alvina Ling and when Marcie wrote her first picture book, he passed it along to Ling to look over.

This is the part of the story that beginning writers dream of and imagine is the secret backdoor way into Publishing.

Splash-of-cold-water Truth: it rarely happens that way in real life, and it didn't happen that way for Marcie either. For one, she admits that her first stab at a picture book wasn't all that great. Fortunately, Alvina Ling was kind enough to not dwell on that with Marcie.

She did not buy the picture book. Instead, she gave Marcie some advice:

Marcie did all three of these over the next several years, taking classes online, and when she couldn't find a critique group in her area, forming her own. In the meantime she wrote a ton and read a ton, not submitting anything at all until she felt that she had a better sense of the writing craft and the industry. [shameless plug: it really does help to join SCBWI!]

When she was ready to submit again, she had a few completed polished projects, and one of these snagged the attention of an agent. Things happened quickly after that. One book sale, the picture book The Adventure of the Penguinaut with Scholastic in 2018, and another, Love,Triangle with Balzer & Bray/Harper Collins in 2017.

And then another fun opportunity came her way, the eight-book Super Happy Party Bear series developed with Erin Stein at Macmillan. In the cool twisty world of publishing, the first two books of that series, which were written after the picture books, will be out Sept. 6, 2016 and featured in Target.

Marcie had never written a chapter book up to to that point, but she threw herself into learning about the genre and is happy that she said yes to the opportunity.

And saying yes seemed to be the theme of our group breakfast with Marcie. Yes-- to putting your work out there and facing lots of rejection, Yes-- to plunging into learning everything you can about your craft and the industry, Yes-- to making contacts and new friends, Yes-- to hard work, and

Yes-- to recognizing lucky opportunities when they come your way, even when they don't quite work out how you dream...

Because in the end, saying Yes is the only surefire way to make your dreams come true.

For more about Marcie Colleen and her soon-to-be-released array of books, check out her website here: thisisMarcieColleen.com