We didn't know about the shooting

because we were out eating an early dinner.

The owner of the bookstore and the events coordinator and the two visiting authors and the lovely librarian who'd set up the visit, tucked away in a corner booth, sipping our waters and making small talk, at first, but then slipping into a potentially stressful dinner conversation.

because several prominent male authors had been accused of sexual harassment and people were yelling at each other in the online comment sections, naming names and defending names and meanwhile, I was feeling physically sick, reliving my own crap and also, I knew some of the men, sort of, -- in the way that everyone does in the very small children's book community,

and I had been arguing in real life too, ranting at my best friend, trying to make sense of what I think about women speaking out and the men they are speaking out about and the growing feeling of hysteria, where it seems like no one is really listening to anyone anymore but only yelling at each other,

and the worst thing, for me, is the fear that in the end, after all of the yelling, nothing will really have changed.

But anyway, we were eating dinner.

The authors were Brendan Kiely and Jason Reynolds, in town for a school visit, and readying, after dinner, to sign books at the bookstore where I work now. The topic came up about sexual assault and harassment and MeToo and the men being named (without naming them) and I could feel myself getting sick, how I tend to, when this topic comes up,

especially because Brendan Kiely and Jason Reynolds didn't agree with each other.

But they talked and listened and came to some kind of understanding of the other's point of view and we finished eating dinner.

At the signing they talked about the book they wrote together called All American Boys, which is about a police shooting, told from the points of view of a black teen and a white teen. Jason Reynolds, who is black, and Brendan Kiely, who is white, described how the book came to be, 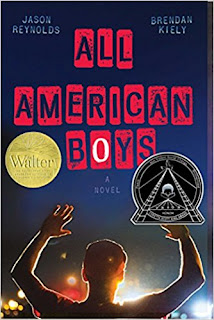 how they were on the road together promoting their books, strangers essentially, traveling and trying not to talk about the things you know you're not supposed to talk about with strangers. Politics. Religion. Race. But there they were, on the road, and the verdict had come down in Ferguson about the police shooting Michael Brown and the riots and protests, and eventually

they ended up talking about it, the black writer and the white writer, talking and listening and trying to understand each other, and eventually, doing the only thing they knew how to do, which was to write.

So they wrote the book together and somewhere along the way, they became friends.

We took pictures and they signed more books and there was something about the conversation that made the world feel more hopeful, to think about the power of reaching out, one person to another, about friendship and disagreement and allowing ourselves to feel uncomfortable and being okay with uncomfortableness because that's the only way to listen, really,

but I lost the hopeful feeling that night, hearing the news about the mass shooting in Florida and then watching all of the yelling commence.

This morning I read Jason Reynolds' book Long Way Down. 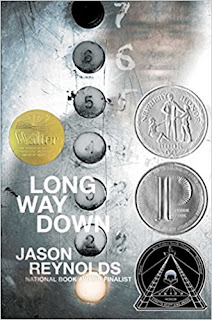 It's a brilliant beautiful heartbreaking story about a traumatized boy, with an ending that pretty much killed me because it leaves the reader on a precipice with the boy, holding your breath with him, about to watch him do something terrible--

But now I've decided, after some thinking, that the ending is not what I thought. It's the opposite, in fact,

and I think the boy is going to do the right thing. He's going to be okay. 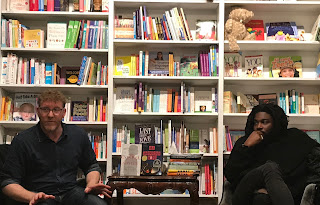 Maybe we all will.