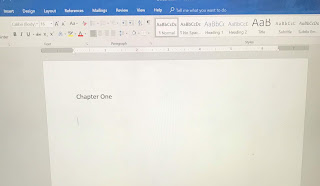 1. Fiddle with the original first chapter for a while, holding on tight, allowing only for a shift of a sentence or two, a shuffling up of a paragraph,

because you spent so much time working and reworking those scenes and if you let them go, then what? A whole new chapter from scratch? no. way.

Set a goal to revise the chapter in a week.
Fail.

(Maybe you can't do this anymore. Maybe the book's no good at the core. Maybe you should write a different book and forget this one.)

2. Realize you've got to let go of the first chapter. The first three chapters, I mean,

because when you set all of that up, you were writing a different book from the one this story has morphed into. Also, since we're being honest here, most of it is backstory anyway, stuff you had to figure out about your character, the things that made her who she is, never mind all of the other characters, the place, the voice.

Set a goal to write a new chapter in a week.
Fail.

3. Complain to your critique partner, to your writing group, to David Levithan at a publishing dinner party. Nod along as they all basically tell you the same thing. Stop overthinking it. Just write. Play around for a while. Trust the process. (Although David Levithan admits that he has never received a seven-page editorial letter.

Set a goal to play around with the first chapter for a week.
Fail.

4. Imagine an alternate reality for yourself where you quit writing. It involves selling other people's books and walking the dog three times a day and marching against injustice.

5. Imagine the reality where you keep writing this book because that is what you do who are we kidding here

6. Set a goal to write one terrible paragraph. In pencil. In ten minutes.
Succeed.

until you finish Chapter One.