I've always been a news junkie. Even as a kid I pored over the local paper-- the comics, Dear Abby, the editorials. As a teen, I wrote letters to the editor, once getting into a dueling editorial argument with my history teacher over the Equal Rights Amendment.

(I said we should pass the ERA because women should be treated equally under the law. She said that the ERA would lead to unisex bathrooms, murdered babies, and female firefighters who wouldn't be strong enough to lift her out of a burning building.)

In college I quit reading the newspaper. No time, I guess. And the paper in the commons room was usually missing. Anyway, what was going on outside in the world seemed removed from what was happening in my little campus bubble. But after I graduated, I was back to paying attention. By then 24-hour news and CNN had become a thing. I was glued to the TV during the Anita Hill/Clarence Thomas hearings and the OJ Simpson-white-bronco-driving-down-the-freeway show and the subsequent trial.

That craziness burned me out for a while, although I still read the newspapers. But I was yanked back into TV news on 9/11.

A friend called to tell me what was happening and I watched the Twin Towers fall in real time, fully aware and sickened by the realization that I had just witnessed the deaths of thousands of people. In the months that followed I was addicted to the TV. Hearing the survivors' stories. Watching the firefighters digging through what they called The Pile. Freaking out over the anthrax attacks.

Until two things happened that woke me up.

One, my three-year-old child and I were outside playing in the front yard and a plane flew overhead and she asked me if it was going to fly into our house.

And that was when I knew that I had crossed some kind of line with the News and it was no longer about receiving information that might be helpful to me as a citizen,

it was now something absurd, something tragic and sad, a source of anxiety and hopelessness, nevermind, a huge time suck, and by watching, I was participating, the equivalent of every moment slowing down to rubberneck at a car in flames on the side of the road.

So I quit watching and I never went back.

But it's hit me again, recently, that I have reached the same point, but now, in a different form. Social media. Online articles. Screaming matches in the comments. Political memes. Whatever. Some days I feel like I am watching the Twin Towers falling over and over again.

But worse, because I am losing my capacity to feel shock, horror, empathy, and grief at the sight.

Of course I do want to know what is going on in the world so I can be an informed citizen. I belong to the ACLU and Planned Parenthood and Mothers Demand Action for Gun Sense in America, and those organizations send periodic emails about upcoming legislation and action that I, personally, can take.

Such as calling my representatives. Protesting. Voting.

But for my own sanity, I think it's time to pull my head inside the car as I drive down the highway strewn with burning cars-- (by turning off news notifications. Blocking political sites from my laptop. Removing myself from Twitter... ) and pay attention to the road.

I suspect it's going to be a long, bumpy ride. 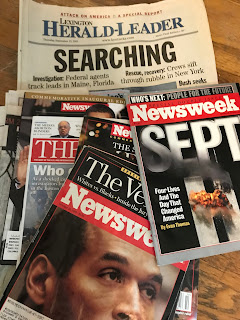