because I'm skeptical about pretty much everything.

The other day, for example, I got an email with my name and an old password in the subject line (which, okay, did freak me out momentarily) and then I read the email that basically said that I'd been doing something embarrassing online and they'd caught me on my computer camera and if I didn't give them three thousand dollars, they'd show all of my contacts, and don't go to the police and hurry up send the money now, the clock is ticking--

and I thought, Wait,

what embarrassing thing was I doing? Did walking around in my office in my underwear count? To make a long story short, I forwarded the email to my tech savvy son who told me it's a new phishing scam going around, probably using hacked passwords from a data breach (thank you, yahoo mail),

so no worries, but maybe use this opportunity to change passwords on all of my accounts. Also, it wouldn't hurt to cover up my laptop camera.

So, I did that, thinking about the people who might be right now freaking out for real and sending money to this joker, which got me thinking how I have never been one of those people.

Even when I was a kid I was skeptical,

like the time I received a handwritten chain letter in the mail from a friend instructing me to write out ten letters exactly like that one and send them to ten other friends, or the chain, which had been circling around the world for twenty-five years, would be broken and bad things would happen to all of us,

and halfway through writing out the first letter, I wondered if I really wanted to curse ten more people with such an inane task. And surely I couldn't be the first person to break this dumb chain in twenty-five years.

Around the same time I read a story about the Jonestown Massacre in a magazine and I couldn't stop looking at the picture on the cover, all of the dead bodies laid out in rows in the jungle, all of those people who'd followed a cult leader down to South America and then, all of them-- over 900-- willingly drank the poisoned kool aid when he told them to.

Which stuck with me over the years because I couldn't get over it. What would make a person suspend all critical thinking and nod along as some mad man ranted and told you to kill yourself?

Even as I kid I couldn't fathom being so gullible.

Maybe because I was living in a house where bad things were going down and we all had to act like those things weren't happening, but I kept thinking, wait, no. This IS happening, and I told a bunch of people (who didn't do anything about it) but whatever, I knew what reality was, and no way was I going to act like I didn't.

That kind of thing tends to stick with you too.

Something interesting I learned recently about the Jonestown Massacre is that all 900+ people did not willingly drink the poison.

Three hundred or so of that group were children and were given the drinks by trusted adults. Another 300 were elderly people, sick people, people who tried to resist but were made to drink at gunpoint by soldiers at the camp.

Meaning that when people talk about crazy cults and use Jonestown as an example, it's important to note that only one third of the people followed the madman until the end.

Still horrifying and impossible to understand, but better than imagining the entire group shuffling up together with their cups. And making me feel somewhat more hopeful about the state of the world this morning.

I guess what I'm saying is that if some present-day madman does end up shooting someone in the middle of Fifth Avenue, in all probability two thirds of his followers might toss away their kool aid cups.

If you want to know more about what happened at Jonestown, this book is illuminating: 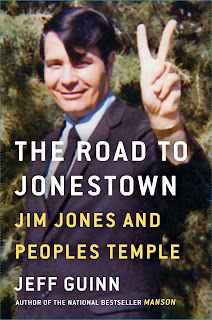