Book recs from my family to yours

We've got a full house here for Thanksgiving, and in between chowing down on 15 pounds of turkey and Grandma's ginormous tin of homemade m & m cookies, everyone is busy reading.

Including Mr. Peppers, visiting from Florida, who is checking out the latest 614 Magazine with things to do around Columbus. 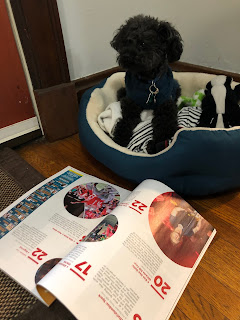 A good audio book series, according to my husband, is the Stephanie Plum Mysteries by Janet Evanovich. The actress who reads the series does a great job voicing the characters and the books are fast-paced and funny. My husband used to hate his commute back and forth to work, but now, thanks to his Stephanie Plum audio books (borrowed from my library!), he hardly minds anymore.

The best book my mother ever read is Where the Crawdads Sing by Delia Owens. Side note: this novel has been on the New York Times Best Seller List for weeks and as long as I have been working at the library, people have been on the waiting list to borrow it. Last time I checked, there were 1000 people in line. Get in line now and you will, according to my mother, cry your heart out.

Auntie Jan says to tell you that the latest John Grisham book, The Guardians, is supposed to be very good. Also, the latest Nelson DeMille. But right now she is re-reading all of the Outlander books because she is in love with the series on Netflix. Plus, she thinks book number 9 is coming out soon and she wants to be ready.

Grandma Linda (of m & m cookie-baking fame) is a fan of the Stone Barrington series by Stuart Woods because she likes the characters and the mystery.

Grandpa wants to recommend a movie. His favorite is Independence Day because he likes how Will Smith blows up the aliens. And speaking of aliens,

Our son, who is not with us for the holiday because he is presently climbing a large rock in Nevada and scaring the crud out of me, highly recommends  The Three Body Problem by Cixin Lui, which is "a sci-fi about the cultural revolution in China, but also aliens."


And last but not least, our daughter, who is also not with us because she is presently gallivanting around London... but thankfully, not climbing large rocks: The Hypnotist's Love Story by Liane Moriarty.

Me: What did you like about it?
Daughter: The voice
Me: Can you give me a little more?
Daughter: No.

And there you have it.

Tune in next week for book recs from me!