The eighty-eight year old woman in our home

likes to sleep in the sun.

Or sometimes she will curl up on a heating vent. Why is it so cold in this house, we will say, and then we will stumble shivering into the kitchen and find the eighty-eight year old woman parked out like a queen on the vent, absorbing all of our heat.

Another place she likes to snooze is on a plumped up pillow that we've stuffed inside a box and tucked into the closet. Putting away our clothes in the afternoon we hear her light snores, tiptoe out of the room so as not to disturb her nap.

She is not much of a traveler.

Truth be told, she doesn't like anyone else in the family to travel either. She hasn't told us this, exactly, but she makes her very strong feelings known. Leave an open, half-packed suitcase on the bed, and the next thing we know You Know Who's stretched out grooming herself upon it.

And speaking of grooming, she will tolerate a combing for approximately three minutes and then she will bite us. She does not bite hard, so we try to overlook her aggression.

We have suspicions that she is a Republican.

Also, she is a prankster. Often she will sit in the exact center of a doorway or on the stairs because she knows the dog is afraid to walk past her. What's the crying? we'll say. Where's the dog? we'll say, and then we'll see the eighty-eight year old woman, blinking at us and smirking, the dog cowering behind her.

We have known her for eighteen years, through three house-movings and two states, five fish, the already-mentioned dog, two children--who were once elementary age and then teen-aged and now adults.

At night she likes to sleep on my head.

Last week she had a stroke and went blind. She wobbled woozily around the room for a day but then righted herself. Twitching her tail, she explores the new dark world, finds the heating vent and her food.

It's almost time, the doctor tells us. But seeing as how she's still having some good days, it's okay to wait a bit.

We cart her back home and let her go, watch her circle her way around the room, carry her up and down the stairs, comb her for approximately three minutes, help her find her pillow.

Tiptoe out of the room so she can rest. 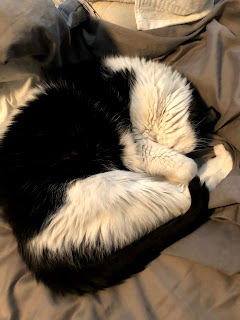