The woman in cabin 10 is not on my stairs

but I was listening to the audio book of that story while I was scraping other book titles off of my stairs.

You might be wondering at this point why I had book titles stuck to my stairs. The short answer is the previous owners of our new-old house had interesting decorating taste. Exhibit A: all of the door knobs in our house are faucets. Exhibit B: the large eyes stenciled on one of the dining room walls. Never mind the prison door in the garden.

But Jody, people (ie my mother) would say to me, You love books!
Yes, Mom. I love books. I just don't happen to like book-title-decals stuck to my stairs.

Luckily, I had a good audio book to listen to while I was scraping them off. For the record, the work of scraping these decals was painstaking and slow. Basically, I had to use my fingernails. A paint scraper scratched up the wood. Ditto: a razor blade. Meanwhile, what was happening in The Woman in Cabin 10 was freaking me out. 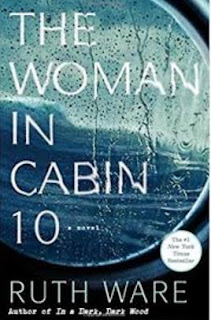 The premise: a woman who has been traumatized by a robbery must go on a small cruise ship to write a story for a magazine. The woman in the cabin next door disappears the first night. The problem is that the cabin next door did not have a guest officially staying there and everyone aboard the ship is acting as if our main character must have imagined...

the woman in cabin ten.

A good audio book for heaving boulders out of a koi pond and yanking out the old rubber liner is Cuckoo's Calling by Robert Galbraith. This is the first book in a series about a down on his luck detective who gets pulled into solving a much more complicated and dangerous crime than he'd bargained on.

Side note: I was telling my model librarian friend about this book and she literally guessed the murderer within two seconds of my telling her the premise. I was like, no way! It can't be him!

Cut to: Me heaving a boulder on a ninety degree day and discovering that she was right!


If you need an absorbing and entertaining audio book for the day you are painting the orange dining room ceiling white, I highly recommend Daisy Jones and the Six by Taylor Jenkins Reid.

This is a full blown production with different actors playing the various roles. The premise of the story is the rise and fall of a (made up) rock band in the 1970's, told in the form of interviews with the band members, sort of like a Behind the Music episode.


One audio book that I did not like as much, but yet, could not stop listening to as I painted the stairs (after scraping off the book titles) was Sunburn by Laura Lipman. The premise: a woman with a mysterious past meets a man with a mysterious past and, I know this was sort of the point, but still it bugged me-- you can never tell if the woman is good or bad or if the man is good or bad, and it was nerve wracking, honestly, wondering if they were going to kill each other or fall in love.

On the plus side, by the time I figured it all out, my work on the stairs was done. 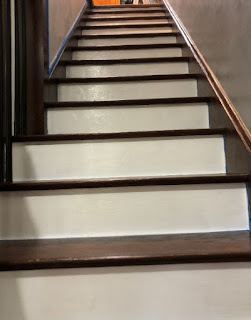 Removing the hot tub presently lodged in our basement. Anyone have any audio book recommendations for that?

Also: Anyone want the hot tub in our basement?