This is the end

was playing on the stereo

and we were having one of those inane (but we thought) deep, philosophical conversations about life and what a giant bummer it was that we were living in the 1980's when everyone knew the 1960's were way better. Because of the music, for one thing. I mean, The Doors were awesome.

Also, we liked the clothes. Mini skirts and tie-dyes. Supposedly, the weed wasn't as good, so that was one drawback, but the point is

people-- young people--cared about stuff then. They were out protesting in the streets against the war and marching for civil rights, and here we were, stuck in the boring 1980's, where there was nothing to protest, nothing to get fired up about, except, maybe global thermonuclear war? (but we didn't count that. because what were you going to do? Chain yourself to a missile like some weirdo Catholic nun?) What were we talking about again? oh, right. The sixties. When people cared.

That sounded true, I had to admit, and then you told me the story about how your roommate threw his stereo out the window because he was annoyed that his records kept skipping. Three stories down, the thing shattering apart, and then he hauled all of the pieces back up three flights and told you to throw it out, and you did.

Now that's a protest, you said, and I laughed. We were such a weird mix of smug and innocent when we were twenty-two. Smug, because we thought we knew everything. Innocent, because we believed protesting and things to care about were things that only happened in the past.

Flash forward thirty years and I am getting ready to go to a protest. It's cold outside, the streets wet with ice and snow. Alexa, I call out, play The End by the Doors. She does and I am surprised by how much darker and crazier the song sounds than I remember. Also, I forgot that the character in the song kills everyone in his family.

Only took me thirty years to figure this out. Today, I am no longer smug and innocent. I understand now that I know nothing and that the country I love is much more fragile than I realized. But weirdly, I am optimistic. Today could mark the beginning of the end of our democracy.

I head outside anyway. 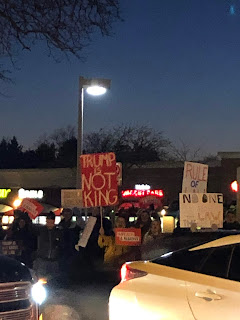