(in no particular order)

An American Marriage by Tayari Jones

I love books where I have no idea what is going to happen next, and this one, hands down, wins in this category. Two newlyweds find themselves trapped in a nightmare that could only happen in America. Halfway through this novel, I still didn't know which character I was rooting for or how in the world the author was going to pull off the ending. Spoiler alert: she does.

Daisy Jones and The Six by Taylor Jennings Reid.

Grab this one on audio the next time you're on a car trip (or painting the orange ceiling in your dining room). The absorbing back story of a Fleetwood Mac-ish-style 70's rock band-- how they came together and how the whole thing fell spectacularly apart.

So We Read On: How The Great Gatsby Came to Be and Why It Endures by Maureen Corrigan.

The perfect book for the person who's read The Great Gatsby 50+ times and religiously follows book critic Maureen Corrigan's book reviews on NPR. (okay, I am talking about myself. But I really do think that even if you've only read Gatsby once way back in high school, you might enjoy this.)

Be warned: This is not a romance even though it does have at boy meets girl/boy loses girl/boy gets girl back at its core. Dark and heartbreaking with real, complicated people who long to be normal, but alas, that doesn't seem to be in the cards. I still can't believe it was written by a twenty-eight year old. (Side note: Maureen Corrigan highly recommended this one.)

Love and Ruin by Paula McLain.

I loved The Paris Wife, which is the imagined story of Ernest Hemingway's relationship with his first wife Hadley. But it's possible that I loved this book, the story of Hemingway's third wife Martha Gellhorn, even more. I heard Paula McLain speak a few months ago about both books and this question naturally came up in the Q & A: Will you ever write a book about Hemingway's second or third wives?

The short answer was no, because she did not like those wives.

This sweet, smart romance follows Annie, a rom-com obsessed heroine, who finds love with a guy who is not Tom Hanks, but is still pretty cool. Bonus: there's a fun scene set in the Book Loft, my favorite 32-room bookstore in Columbus Ohio.

Ill Will by Dan Chaon

This one was a recommendation of my Circ Manager Sara, who said it had the most horrifying ending she's ever read. Premise: When the main character was a kid, his parents were murdered by his older brother. Now he's a happily married psychologist with two sons... until one day a patient shows up spinning a conspiracy theory that a devilish cult is responsible for the string of drowned college guys in the area. After that unsettling therapy session, our main character learns that his brother was just exonerated by DNA evidence and is about to be released from prison.

The two events have nothing to do with each other... or do they? (Oh, and Sara was right.)

The Great Believers by Rebecca Makkai

Another Maureen Corrigan rec. An absorbing story that tackles as its backdrop the height of the AID's epidemic in the 1980's-- the immediate effect of loss on the gay community and the rippling effects in the future for the survivors. (If Ill Will has the most horrifying ending, this book has the most heartbreaking beginning.)

Shirley Jackson: A Rather Haunted Life by Ruth Franklin

As soon as I learned that the author of "The Lottery" and The Haunting of Hill House also wrote humorous stories for women's magazines about her daily life with four kids and a large dog, I wanted to know more about her, and this biography lays it all out. Shirley Jackson was only 48 years old when she died, but somehow she managed to live the dual life of wacky 1950's suburban mom/ professor wife while at the same time writing six novels, three memoirs, and over 200 short stories.

Light the Dark: Writers on Creativity, Inspiration, and the Artistic Process, edited by David Fassler

I struggled with writer's block for part of this year and I credit the Universe with sending this book across the Check-in desk at my library just when I needed it most.

In it, the editor asks 46 writers what piece of literature inspired them to write. The answers cover everything from favorite books to writing tricks to theories about where ideas come from and how we get the motivation to do what we do every day. Two or three essays in, and I was reminded what drew me to being a writer in the first place,

and before I read the last page, I was writing (joyfully!) my own pages again. 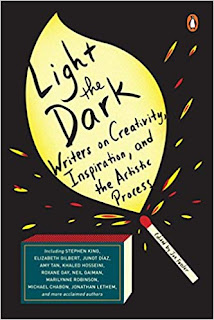