Confessions of a (secret?) Tiger Mom 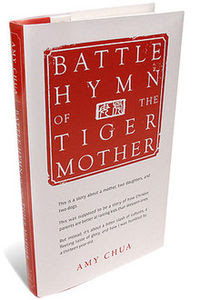 Maybe you’ve heard of the controversial book by Amy Chua, Battle Hymn of the Tiger Mother. It came out earlier this year and outraged lots of American women who were suddenly aware of and defensive about their supposedly permissive/pathetic parenting style. Bits and pieces of the book fluttered around the internet so I thought I knew all about it—how the uber-controlling Asian professor mother had her poor kids practicing violin five hours a day, and how she once made her daughters redo their homemade birthday cards because she knew they could do a better job than the lazily scribbled junk they’d given her. Sheesh. Take a chill pill, lady, was what I thought. And then I sighed a superior sigh and clapped myself metaphorically on the back.

Until I actually read the book. It was a Christmas present from my brother, and I won’t attempt to figure out the motivation behind that. I picked it up after Christmas dinner and could hardly put it down. Yes, the woman does go to the extreme sometimes. (Extreme may be putting it mildly. Chua once forbade her daughter from going to the bathroom until she got a violin piece she was working on just right.) But overall I found myself nodding along as I read.

The book is surprisingly funny. Chua knows when she’s going overboard, but she just can’t seem to stop herself. She has high standards for her daughters and one of her main goals is to demand that they live up to those standards. Failure truly isn’t an option. When the family gets a dog, Chua tries to apply the same strict Chinese mothering techniques on it. In one scene when she and her husband are arguing about the level of tension in the household (due to Chua’s constant pressure on the kids), she accuses him of not having any dreams for their daughters, or for Coco. He bursts out laughing.

But Chua presses on. She believes that pretty much anything can be accomplished with hard work. Lots of hard work. Nothing is fun when you first start out. You have to practice. And what kid wants to practice? An American parent tends to throw up her hands at the first sign of struggle, while a Chinese mother doubles down. For her, giving in is basically telling the kid that you don’t believe he can do it.

A lot of the stuff in the book made me cringe. Some—because it really is kind of wacky, the lengths the Chua will go in her quest. (She takes one daughter out of school early because what she’s doing in class seems sort of pointless and this way she can get in some extra violin practice.) But mostly because I could see myself in Chua too. I’m not saying I’m a Tiger Mother (or, geez, maybe I am and this was the point my brother was trying to make) but because I understand the fierce love she has for her children—to want them to be successful and brilliant and great at everything they do. And while Chua doesn’t seem to care about this, I would also add: happy and socially well-adjusted to the list.

How do you accomplish it? Is it even possible for a parent to manipulate these outcomes? If not, is it a worthy goal to strive for anyway? Who knows, but it’s a relief to see other parents struggling with the same battles (on a somewhat grander scale). Tiger Mother is a book-long, guilt-infused confession. People had asked Chua how she came to have such accomplished, talented children, and she gave them the behind the scenes story. Those daughters aren’t brilliant, musical prodigies. They’re hard workers.

Email ThisBlogThis!Share to TwitterShare to FacebookShare to Pinterest
Labels: Amy Chua, Battle Hymn of the Tiger Mother, being a mom