Winter in Columbus (also the tail end of fall and most of spring) is relentlessly bleak and gray. I heard somewhere that we have fewer sunny days than Seattle. I don’t know if this is true, but I wouldn’t doubt it. For the past few years, to keep my mind off the interminable dreariness, I’ve thrown myself into various time-consuming projects. Painting all the trim in the house was one fun project. And by fun I mean that it was not fun. Last year I practiced with our town’s women’s rowing team. Yeah. That was “fun,” too. The year before that I signed up for a watercolor class through the local parks and rec. This endeavor stretched the boundaries of the word fun too.

Let me preface this by saying I am not what anyone would call artistic. Unless you count having the ability to doodle a cube. But I was hoping I could learn. I had this thought that using another part of my creative brain would help with a book project I was working on. I obediently bought the prerequisite art supplies, nearly busting my budget on the paper alone. Side note: art is way more expensive than writing is.

It didn’t turn out how I expected. My vision of watercolor was kind of impressionistic and Monet-ish. The class turned out it be more of a study in paint-by-number. The teacher would show us a picture and we were supposed to copy it on our own paper and then color it in. He didn’t explain how to blend paints. I know. I know. How hard can that be? But somehow everything I mixed turned into various shades of gray. This became a metaphor for that winter. And my life.

That was the last time I tried to “do” art. It still intrigues me though. I have a good friend who is an artist and we’ve talked about how similar the creative process is, whether you’re working with fabrics (as she does) or with words (as I try to do). There is that little difference in expense mentioned above, but otherwise our feelings about creativity and the discipline involved are the same.

I’ve noticed that many characters in YA books have some connection to the arts, either as writers, or as artists or musicians. The main character in Gayle Forman’s beautifully written novel If I Stay, for example, is a cello player who is in love with a rock singer. Jessica Martinez’s new novel Virtuosity is about a cello player too, a prodigy pushed to perform by her driven mother. There’s a conflicted artist in Kirsten Hubbard’s travel adventure, love story Wanderlove. And an artist obsessed with Salavador Dali in Tom Leveen’s new book Zero (Release date: April 2012).

I read Zero over the weekend and it got me thinking a lot about art and music. The main character Zero has a totally original, distinctive voice that grabs the reader from the very first page. “Here’s the thing…” is how she starts most of her commentary. She’s got a major inferiority complex about her art, mostly because she was denied a scholarship to a prestigious art school. Now she’s stuck going to a local community college and taking an art class led by a new-agey flake painter. Zero’s also hobbled by her messed up home-life—Dad who drinks too much, Mom who enables him, and their explosive nightly fights. Art is an escape. And so is the punk music scene in Phoenix, which is where Zero meets Mike, the cool mysterious-eyed drummer in a band on the verge.

The book easily transcends the angsty teen drama genre. There’s quirky Salvador Dali quotes at the beginning of each chapter, such as “the difference between the Surrealists and me is that I am a Surrealist.” And funny/spot-on dysfunctional dialogue between Zero and her parents. And a love scene that has got to be one of THE most heartbreaking and awkward scenes ever written. It ranks right up there with John Green’s Looking for Alaska (which I won’t get into now. Let’s just say it’s a little too painfully real and therefore one of the reasons the book tends to get removed from school library shelves.) But my favorite parts were when Zero and Mike talk about art.

At one point Zero says: “I really want to sell a painting someday. I mean, I’d do it anyway. But I just—I don’t think I’ll believe I’m any good until someone I don’t know hands over a couple of bucks for something I did. Is that wrong, do you think?”

That’s the point, right? That you enjoy what you do, whether it’s art, music, writing, or whatever. Here’s the thing, in a gray season of impending-but-not-looking-so-impending book deals, it was just the bit of inspirational wisdom I needed to hear. 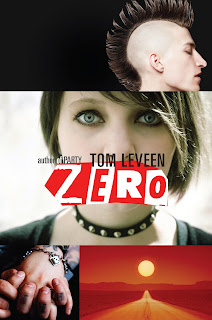 Email ThisBlogThis!Share to TwitterShare to FacebookShare to Pinterest
Labels: being a teen, Tom Leveen, Zero