Red Riding Hood, Tattoos, and Other Gifts of Charity

Saturday my family volunteered to help out at a Christmas party for underprivileged kids. It was a nice party. Holiday songs played. A Santa sat up on the stage so kids could sit on him. There was food and crafts and games. My daughter and I decorated kids with tattoos. Turns out this was kind of stressful. Some of the tattoos didn’t latch on properly. Only half the candy cane stuck. Or one of the elf arms got lopped off. The kids didn’t typically like a wet, cold sponge pressed on the back of their hands. Or on their cheeks. Or for one kid, smack dab in the middle of his forehead, which ended up sparking a momentary trend in snowman tattoo placement.

My husband and I had gone out to buy gifts the week before. His company sponsored the party, and his office had contributed donations, but it was up to us to purchase the items on the wish list. The little girl we’d drawn wished for a coat and gloves. Also a “doll baby.” That’s the way she wrote it, and I don’t know why but it killed me, that wording. We weren’t allowed to spend too much money (to make things fair, the organizers said) so there were elements of resourcefulness and planning involved. How could we afford to get the coat AND the doll baby without going over the limit? We managed, though, and I was hoping to watch the little girl open the presents, but we didn’t get to stay for the gift opening. It was just as well. I think the organizers wanted the gifts to seem like they’d come from Santa. Instead of from well-meaning, over-blessed, seasonal do-gooders.

What kids want to have it pointed out to them that they’re needy? I remember going to the bank with my mother when I was seven years old. In the lobby there was a display of what seemed like hundreds of dolls. Each one was dressed up in a different outfit. A lacy ball gown. A hula skirt. Flowery nightshirt and bathrobe. It took a long inspection for me to realize it was the same doll wearing different clothes. I stared at them longingly while my mother went about her banking business then I asked her if I could have one and she told me they were for the needy. I’m not sure I understood what that meant except that I couldn’t have a doll. And I didn’t understand it later when that Christmas, I DID get one of the dolls, the one dressed like Little Red Riding Hood. That was the year my father died and my mother was instantly a young single mother with three kids under the age of seven. Maybe she hadn’t realized we were needy either.

I was having flashbacks of Red Riding Hood when I was carefully pressing tattoos on little kids’ cheeks and they would flounce off to grin at themselves in the mirror and I would pray the tattoo wouldn’t peel off while their parents smiled wearily and didn't look me in the eye.

A few weeks ago I read the book Mountains Beyond Mountains by Tracy Kidder. It’s a true story about a guy named Paul Farmer, a Harvard doctor who volunteers most of his time at a clinic he started in Haiti. 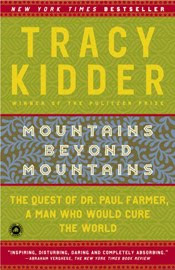 The book is alternately depressing and inspiring. It’s depressing because there is so much need in the world, and these needy people are ordinary people just like any other people who for the most part are forgotten and ignored and suffering and sometimes dying because no one is helping them. And it’s inspiring because Paul Farmer, one ordinary but clearly brilliant and caring man, is doing everything he can to save them. And then it’s depressing again because you read this book, or at least I did, thinking what the heck is wrong with me, sitting around worrying about inane meaningless stuff like stupid book deals when there are real people right now out there in the world starving and sick and in pain?

And what did I do with this realization? I took a few hours to shop for a coat and stick snowflake tattoos on kids’ faces. Not sure how much of a difference that made in the ultimate scheme of life. Or who knows. I really liked my Red Riding Hood doll. It was clear to me when I opened it the Christmas I was seven that it was the best doll from the bank lobby display. I don’t know who donated it, who sewed the darling jumper and cape and hood. It was a small thing but it meant something to me, a needy little girl who didn’t know she was needy.