What Color is Rue?

This morning children’s book editor Harold Underdown posted a link to an article about the movie casting of Hunger Games. Apparently new movie posters have come out with one picturing the darling character Rue played by an African American actress. The article went on to catalog the various responses to the casting, which ranged from surprise about the character’s race to disbelief. For the record the book clearly describes Rue as having “dark brown skin and brown eyes.”

But I hadn’t clearly registered this. And I wondered what that meant about me. I posed the question to my kids at breakfast, who had both read the book and loved it. Neither one had pictured Rue as an African American, and my son went on to say that he hadn’t pictured her at all.

Which opened up a discussion of how we imagine characters’ looks. For example, none of us could describe Katniss, the main character, but now with the movie coming out, we all imagine her looking like the actress they’ve cast to play her. How important are characters’ looks anyway? I know when I write a book I have a picture in mind of what the characters look like, but I don’t spend much time describing their physical attributes.

A character is not going to walk around thinking, “I am white and I have brown hair and blue eyes.” Some writers fall back on the cliché of the character passing by a mirror and noting his reflection. Or you could have one character remarking about another character’s physical attributes. But here you risk sounding like a romance novel. Exhibit A: Bella in Twilight constantly remarking about how Edward looks like a supermodel. With his auburn hair and his soft golden eyes and the marble planes of his chest.

Looks are important in movies but maybe they’re not so important in books with much of the description left for the reader to fill in for himself. Which my son pointed out, for him, was “a default white character.”

This led to another discussion. Is it okay that the default character is a white character? Probably not, for all the non-white readers in the world. I think I might understand how they feel. Notice I said in the above paragraph that the reader is left to fill in for himself. I fell back on the default male sex. The use of he to refer to both men and women has always bugged me. Yeah, it’s awkward to say he or she. And sure, everyone knows that when you say he, you really mean both he and she anyway. “And you can’t say she,” said my son.

He explained that whenever he comes across she in place of the understood he or she, it pulls him out of the narrative. He doesn’t like it. Well, I suppose he wouldn’t. Since he’s a he.

Language is more powerful than we realize in shaping how we view the world and ourselves. People might joke about political correctness, saying firefighter instead of fireman, for example. But I think that was a worthy change. As a woman when I read he, I picture a man. When I hear the word mankind, I imagine a default group of men.

Maybe what’s really going on here is unless a character’s description is pointed out again and again, like Edward’s chiseled abs, most of us are going to picture a version of ourselves. But it would be nice to have other pictures to picture once in a while. A she here and there thrown into a textbook. A black character who is simply black because that is what she is. Like Rue. 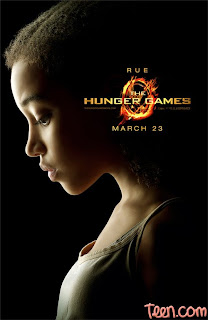