But don’t worry, you’ll be fine even if for some reason you are not a scientist (but just for some context, you may want to check out this video since it will blow your mind in the most educational way possible). Anyway I am applying to Yale early action this year because I’d rather get rejected than never know if I could have made it, but it’s now eating away at my psyche in the weirdest way imaginable.

Yale accepts 2000 people per year, out of 27000 applicants. 27000! (if you could capitalize numbers to indicate yelling, I would have there). And I literally cannot stop myself from fantasizing about what I’ll do when I learn that I’m accepted even though it statistically cannot happen. 6000 people apply early action to Yale (like me); I don’t know how many are accepted, but a lot of them are deferred to have their application reread with the regular decision applicants. It’s a second chance that takes 4 months to evaluate and is practically guaranteed to happen to me. I think I am qualified to go to Yale, but just think of how good I have to be to get accepted early action: Yale reads my application and is SO confident that I’m in the top 7% that they’re not even going to wait to see the other 21000 applications before they say yes. How could that possibly happen?! Yet, I just can’t stop imagining myself getting accepted in 5 days. 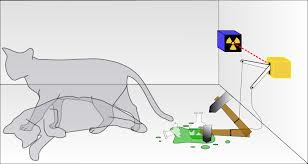 So now that I’ve done the interview, I have lost literally all control over what happens to my application. I’ve basically bought myself a lottery ticket with decent chances, but as far as I’m concerned, my chances are just weighted randomness. And because, in the system that is my sphere of existence, no physical law governs whether or not I get accepted, it is truly random. It’s like if Schrodinger’s cat were reading Yale applications: if the cat lives, the application is accepted, and if it dies, the application is rejected. The acceptance/rejection letter is a quantum superposition of both accept and reject simultaneously (deferral isn’t included in this because deferral will always lead to either an accept or a reject). I am both a future Yale student and not a future Yale student at the same time, and I will be both until I observe the letter and collapse its wave function into either accept or reject. If I get rejected, the moment before it occurs will be the closest I ever come to being a Yale undergrad as I will have been in the superposition of acceptance right before the rejection.

Another consequence of quantum mechanics (that has no proof at all even among scientists but has been speculated by theoretical physicists because it is technically “possible”) is that instead of something being in the quantum superposition of two states when a random event is about to occur, the universe actually splits into two separate, parallel, and otherwise identical universes where one outcome occurs in the first universe, and the other outcome occurs in the second. This process of universe-splitting is painless and totally unnoticeable but may provide drastically different universes as a result. For example, imagine flipping a coin and wagering your life-savings on it landing heads. In the universe where the coin lands heads, you become wealthy, but in the universe where the coin lands tails, you lose everything. This gives me some comfort, however, because when I nervously open my letter from Yale and see a rejection, I know that in another universe, my heart isn’t dropping into my stomach with disappointment, but with excitement. Unfortunately, there is no guarantee that I’m lucky enough to be the version of me experiencing the success, but the acceptance is out there. It may just be a mere universe away.

Where am I going with all this quantum weirdness? I was talking to my friend today and he was talking about how his older brother applied to MIT early action last year. His brother was checking his email one day last December and saw the letter from MIT. He knew it was his acceptance/rejection letter and he didn’t open it. He simply looked at the subject line in his inbox and then chose not to click it – every day, for two months. What it really came down to was this: why did he do the things that he did? Is it for some sort of outside recognition or because he actually wants to do it? If he got accepted to MIT, it wouldn’t somehow make him a different person than if he was rejected. So anyway, I’m not going to tell you whether or not he ended up getting accepted, because it just doesn’t matter.
Posted by Jody Casella at 10:45 AM