A Bird, the Brain, and the Meaning of Life

I read two good books over the weekend that are still spinning around in my mind. Where Things Come Back by John Corey Whaley and an advanced review copy of Fracture by Megan Miranda (pub date is Jan., 2012).

Seventeen-year-old Cullen Witter in Where Things Come Back could be the millennial generation’s Holden Caulfield. He tries to be upbeat about his life in rural Arkansas, but it’s tough. At the beginning of the summer his cousin dies of a drug overdose. His younger brother Gabriel, a sensitive, brilliant oddball, is grief-stricken. But life goes on, Cullen wryly observes. He’d like to be a writer someday, but all he’s been able to muster so far are potential book titles. When a weird guy from out-of-state shows up proclaiming that he’s seen an extinct woodpecker in town, Cullen has tons of comic material to work with. The “Lazarus” bird, as it’s called, gives the dying town hope. Also new marketing possibilities. Cullen’s mom, for example, the local hairdresser, creates a Lazarus bird hairstyle that becomes all the rage for the middle school boys set.
Then Cullen’s brother Gabriel disappears and nothing in Cullen’s life makes sense anymore. 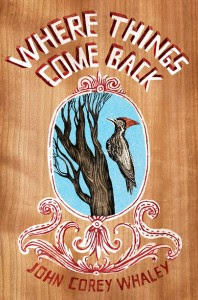 Spliced around this story of a mysterious bird and a missing boy, is another one, the tale of a floundering teenage missionary attempting to please his impossible-to-please father, and his friend, a boy obsessed with the Book of Enoch. If you don’t know this book, it details the fall of angels in the bible and the angel Gabriel’s battle against them.

These two seemingly unconnected narratives collide in a surprising way and allow the author to explore the timeless question: how do we find meaning in life?

The novel Fracture tackles the question too. Be warned: this book is a page-turner, so clear out your schedule for a few hours before starting. In the first few pages Delaney Maxwell falls through the ice of a pond near her house and “dies.” When she wakes up from a coma, to the surprise of everyone, she seems completely fine. No long-lasting physical injuries except for a few broken ribs due to CPR. No apparent brain damage.

Except Delaney knows there’s something wrong with her. In the hospital she is sure that she sees a shadowy figure lurking around her room. And there’s a strange tugging sensation in her head whenever she’s around someone who’s about to die. She’s got other problems too. Her parents are plying her with medication fearing she’s psychotic. The boy next door, the one who pulled her out of the icy pond, is alternately concerned and distant. And there’s another boy who shows up out of the blue, someone who’s also been in a coma and shares Delaney’s “talent” for sensing impending death.
But is he helping Delaney or is he out to hurt her? 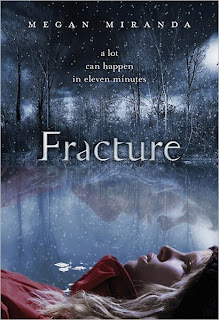 What was interesting to me about this novel was that the author took it beyond the level of straightforward thriller, asking readers: if you knew a person was about to die, what would you do? And how do you live your life when it is surrounded by death?

Two great books by two new voices in YA literature. Be sure to check them out.