I’ve been following this very cool blog by Nova Ren Suma, the author of the gripping and beautifully written novel, Imaginary Girls. Lately Nova’s been inviting other writers to guest blog on particular topics. In October she posted a series called "What Scares You" where writers described their favorite scary books/movies. I wasn’t asked to guest blog by Nova (sigh) but reading all those posts got me thinking about what books have scared me over the years.
You can’t talk about scary books without mentioning Stephen King. The first “adult” book I ever read (back in seventh grade) was The Shining. It scared the crud out of me. I also really likedThe Stand and It. But I think King’s scariest book is Pet Sematary. 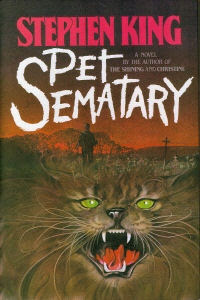 When I read it I wasn’t a parent yet but the idea still chilled me to the bones. The premise of the novel is a young doctor and his family move to a small town in Maine. Life is looking swell for them—nice house, sweet little boy, precious little girl, a cat…The only downside is the very busy road in front of the house where monster trucks zoom by. One of those trucks kills the pet cat and the little girl is devastated. The doctor finds out there’s a pet cemetery, the remnants of an old Indian burial ground nearby. Supposedly if you bury a pet there it will come back. It may not come back quite right, warns the elderly neighbor across the street, and it’s probably not a good idea to mess with the dead, but of course the doctor, concerned about his daughter’s grief decides to bury the cat up there anyway. And it does come back. Not quite right—so not quite right that the daughter is horrified by the sight and smell of it. Life goes on for a while and those trucks keep rushing by the house and one day the little boy gets killed. Well, you just know what the father is going to do.

What’s scary about this book, I think, is not the gruesome gotcha stuff but the impulse most of us can relate to: What parent wouldn’t want to bring his dead child back if there was a way?

King has some interesting things to say about what scares people in his book Danse Macabre. Many of the examples are out of date now—stuff from the 1950’s and 60’s that King grew up on—but his ideas are thought-provoking. One, that in a good horror story there is usually something psychologically terrifying behind the obviously scary premise. Take The Exorcist. Pretty darn horrifying novel/film about demon possession, but King says that what’s really at the core of it is every parent’s fear that her teenager will spin out of control. I recently watched the movie What Lies Beneath, a ghost story about a dead girl haunting a woman. It’s a creepy movie with lots of scary moments, but I think what’s truly scary is the woman’s floundering state of mind. Her only child’s gone off to college and she’s not quite sure what to do with her time. When the ghost starts coming around, other people, including her husband, are patronizing, thinking the woman’s just lonely and bored. There’s a common theme in horror that the person being haunted is simply losing her mind. And what is scarier than thinking that you might be going crazy?

Something that interests me as a writer is how horror writers build suspense. King says that the scariest stuff is the unknown. He uses the example of the heroine in a creepy house where everyone knows the Scary Thing is behind a door at the top of the stairs. The entire book/movie is really the suggestion of whatever that Thing is and the plot is the character walking up those stairs and getting closer and closer to that door. Many writers are good at the building up of tension part, but where they usually fail (and King admits it’s where HE fails too) is when the hero has to finally open the door and show the audience what’s inside. There’s nearly always a letdown. It’s a zombie or it’s a vampire or it’s a giant spider, etc.

Whatever it is, it rarely lives up to what we imagined.

So tell me, faithful readers, what scares YOU?