I forgot what it was like to read to little kids. And then I visited my brother and his family for a few days (See my post “Tips for Surviving the Snow Apocalypse” for other highlights of that fun trip). The first morning when we woke in a cold, powerless house, I heard my two-year-old nephew crying, and feeling virtuous and a little nostalgic about the time flying and the fact that my own once two-year-old was now eighteen and on a college overnight visit, I told my sister-in-law I’d get up and take care of him. After changing his diaper (another skill that immediately came back to me), little nephew and I snuggled up under the blankets of his sister’s bed with a book, Go Dog Go, the classic by P.D.Eastman. 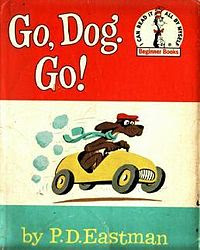 I read it to my nephew fifteen times and probably would’ve read it again except by then everyone was up and my sister-in-law and I were on our mission to find coffee.

It was amazing to me how quickly I remembered that book. And when I say remembered, I mean that I can probably recite it to you now. It was my son’s favorite book too. My husband and I read it to him so many times that eventually we HID the book after my husband said he would lose his mind if he had to look at it again. I’m not sure exactly why it’s such an attractive book to two-year-old boys. Well, maybe I do know. It has dogs. Lots of them. And it has cars. And it has dogs riding in cars. It also has a cool tree with a secret dog party going on up in the branches. That’s a page you and your two-year-old can study for a long time. By which I mean about a minute.

Still don’t remember the book? Let me give you a few highlights:


And of course, the recurring subplot of the budding romance between two dogs and the female dog’s persistent attempts to attract the male dog through her increasingly absurd hat choices. The first time we meet this adorable poodle she is wearing an ordinary hat. “Do you like my hat?” she asks, and the male dog says simply, “I do not like it.” Every few pages we see the couple again, the hats growing more and more ridiculous.

My little nephew LOVED these hat interludes, and we quickly developed our own dialogue.
ME: (pointing at weirdo hat) Do you like my hat?
LN: (shouting with glee) NO!

The two of us also shared a hearty laugh every time we came to the page where a miserable dog swelters on top of a house while the big yellow sun beats down on him. Meanwhile there’s a cool-looking dog sipping lemonade under the house. My nephew and I both agreed that, given our freezing cold lack of electricity situation, we would much rather be the dog sweating on the roof.

Not to go off on a whole books vs electronic media tangent, and maybe I’m like one of those troglodyte people at the turn of the century who insisted that horse and buggy transportation would never go out of style, but I just can’t imagine a world where we snuggle under the covers with our kindles. Books are so tactile. And durable. They can get drooled on. And chewed. They even have a recognizable odor. That Go Dog Go book actually smelled like my son’s copy. And the page at the end displaying the dog party was worn and wrinkled just like my son’s was. (You’ll be relieved to know that my husband’s and my moratorium on The Book did not last long. We gave it back to our son a day or two later and only half-reluctantly returned to the familiar saga of the dogs and their cars. And their hats.)

In case you're worried about it, in the end it all works out for our dog couple. The female dog wears a hat so idiotic, complete with flowerpots and spiders hanging off it, and the male dog shocks everyone by saying that he does, in fact, like that hat. Then they drive off together in his car.

My nephew still stuck with his line, "No." Then we turned back to the beginning and started the book again. Because that's what you do with two-year-olds.
Posted by Jody Casella at 9:47 AM

Email ThisBlogThis!Share to TwitterShare to FacebookShare to Pinterest
Labels: being a mom, Go Dog Go