Books with a Twist

I’m a sucker for books that trick me. I remember the first time it happened. I was ten and my friendly neighborhood librarian handed me a copy of a book called The Truth about Mary Rose by Marilyn Sachs. It was published in 1973; it’s not in print anymore, which is a darn shame because I think the story holds up for today’s kids. 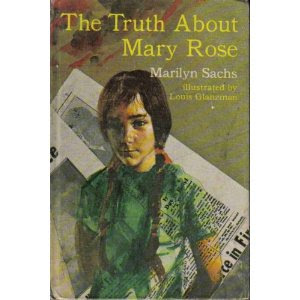 The narrator Mary Rose worships her namesake, an aunt who died in a fire when she was twelve years old after saving all the people in her apartment building. The first Mary Rose was clearly a heroine, and our narrator is enamored with the details surrounding the aunt’s death, so enamored that she and her cousin like to act out the night of the fire, with our narrator in the starring role. The aunt seemed like such a cool, creative person. The only thing that survived the fire was a shoebox filled with her collection of handmade stuff, paper rings that narrator Mary Rose adores trying on. Supposedly there were tons of those shoeboxes, but on the night of the fire, the aunt thrust that one box into the arms of her baby brother, pushed him out the door to safety, then returned into the building to knock on every door and wake the inhabitants. There’s a newspaper picture of her, arms waving from the window of the burning building right before it collapsed.

I was totally caught up in the story, adoring the original Mary Rose myself. So it came as a complete shock to me when the narrator discovers that her namesake may not have been such a noble heroine after all. Throughout the book, her parents reprimand her for eavesdropping on conversations, and at the end she learns her lesson: the little brother who ran out of the building with the shoebox has a different version of the night of the fire. He says Mary Rose was a terrible, bossy, vicious girl who literally pushed him out the door with her precious belongings and returned inside only to save the rest of her stuff. I won’t tell you his other revelations about that night, but the narrator Mary Rose and I were both stunned.

I read the book again and again, caught up each time with Mary Rose’s point of view and struck by the fact that there could be an opposite, equally compelling version of the same events. When I was an adult I came upon another book that had the same effect on me. This one, coincidentally, also had the word truth in the title, so you would’ve thought I’d be ahead of the game.

But The Truth about Loren Jones by Alison Lurie ended up tricking me too. The narrator Polly is recently divorced and feeling bitter about males in general. She avoids them, interacting only with women if she can manage it, and even flirting with the idea of being a lesbian. Meanwhile she’s busy with a new project. She’s a biographer and her present subject is the brilliant, misunderstood painter, Loren Jones. Polly’s thesis is that Jones’s legacy has been tarnished by men, and she sets out to prove it, interviewing one guy after another and threatening to expose them. 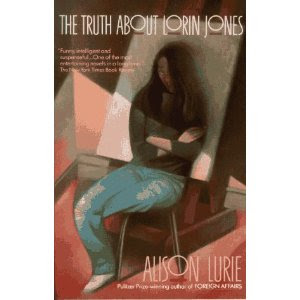 I was mentally patting myself on the back the first time I read this book. I was in grad school working on an MA in English so I was no newby to unreliable narrators. Plus, I had The Truth about Mary Rose tucked somewhere in the back of my mind. I just knew that Polly’s thesis was going to be wrong. She’d discover that Lorin Jones was a lunatic or a bitch or fraud or something, and then wouldn’t she feel like a big fool.
Polly is tricked all right. But the funny thing was that I was too. I’m not going to give this book’s secret away either, except to say that Polly’s revelation at the end was mine. Very cool book that I also read several times, trying to figure out how the author managed to pull it off.
Maybe it won’t come as a surprise to anyone that my own novel—the one currently winging around the editorial desks of NYC—has a similar twist. Here’s the only thing I’m going to say about it (at the risk of jinxing the whole deal): writing one of these novels with a twist is just as fun as reading one.
Posted by Jody Casella at 10:09 AM