When Rabbits Lived at the Library

I can’t remember why I won the contest. But since it happened at the library, it probably had something to do with books. A summer reading quest. Or maybe they just pulled my name out of a hat. Whatever it was the prize was something I don’t imagine many kids today would get too jazzed about: you and a friend get to pet a rabbit. Also, you win a pack of bird cards. The six-year-old me was thrilled. And a little anxious. Here, take a look at the pic below. I’m the one holding the rabbit and reaching out for the bird cards while my sweet best friend Kimmy shares in the momentary limelight. 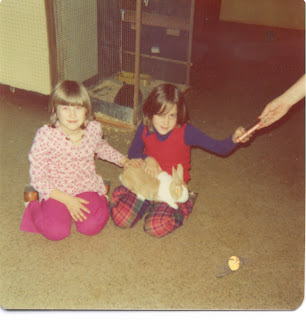 We’re downstairs in the New Britain Connecticut Children’s Library. They do not build buildings like this anymore. I know, I know, our country is broke. But I just poked around online and discovered that the children’s library in NBCT was built in 1931, not exactly a heyday in our country’s economic history. Don’t worry, I won’t go off on a political tangent here.
What I want to talk about is how much I loved that library. I haven’t been there in years so I’ll try to reconstruct from memory. It starts outside with the wall that wrapped halfway around the block.

You can’t see the wall from the picture (and the library shown here is the adult library. The kids’ library is farther down the street. I couldn’t find any photos of it.) But the wall in my imagination was HUGE, great for walking on while carefully holding an adult’s hand, of course. Or maybe that was just the anxious kid I was.

Inside the library, in addition to the stacks and stacks of books, was an enormous fireplace, the perfect place to curl up in front of and read. At the other end of the room were stairs going down to the basement, which housed a museum. This is where they kept the rabbits. I don’t remember what else was down there, (fish? A guinea pig?) and actually they closed the basement up not long after I won my contest. They built a separate museum next door, something with a cool 1970’s artsy/funky look to it. I didn’t like it.

I have to give a shout out to my mother for taking my little brothers and me to the library every week. We walked there (no car) and were allowed to check out as many books as we could carry home. I was on a first name basis with the librarian. She knew exactly what I liked and each week she’d have a stack of books waiting. She’d hold up each one and give me a colorful book talk about it. I always liked her choices. When I was ten or so that librarian told me she was leaving her job. I was devastated. And here’s something that seems strange and sweet to me now. She took me out for lunch as a sort of farewell gift. At a restaurant around the corner we ate sundaes and she talked to me like I wasn’t a ten-year-old but just another fellow book lover.

And about those bird cards, I didn't care much for birds, but for some reason I really liked flipping through those cards. They were like baseball cards but instead of baseball statistics each one had an illustration of a bird and a list of fun facts. I read them over and over, and one of the highlights of my first grade year was when my teacher Mrs. Carlson asked if she could make a bulletin board outside the classroom using my cards.

By the time I was twelve I had read nearly all of the books in the middle grade section of the children’s library and all of the books in the very meager YA section. One day I stopped going into that big room with the fireplace and the closed up museum in the basement, and started picking out books from the adult library next door. By then I had stopped walking on the wall outside. My favorite librarian was long gone. The rabbits, if there were any, lived in the funky museum across the parking lot. I lost track of the bird cards.

Today I went onto the New Britain Public Library website and found that they are having a contest. One of the prizes is a Kindle.
Posted by Jody Casella at 10:22 AM