Joy of Cooking Gets All Snarky about My Turkey 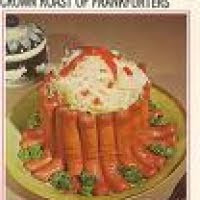 Maybe it’s strange but I love reading cookbooks. Flip through one and you get so much more than a collection of recipes. Old cookbooks are glimpses into the past. I’ve got a 1960’s book that tells me how to talk to my neighborhood butcher. It also contains cool, quirky photos of dishes that would look at home on the set of Mad Men. My favorite is a “crown roast” constructed out of hot dogs.
Many cookbooks have a voice. I’m thinking of course of Julia’s Child’s Mastering the Art of French Cooking. I can’t make her potato and leek soup without hearing her distinctive accent in my ear. Julia seems so imposing and authoritative. When I do her beef bourguignon I close the book when I come to the part where I’m going to skip steps. I just don’t want her to know that I can’t be bothered sautéing mushroom slices in small batches or that I’m too lazy to towel off my beef chunks.
The voice in my Victory Garden Cookbook, which I’m assuming belongs to the author, Marian Morash, is more forgiving.

Marian, going by her picture on the cover, is so happy and perky surrounded by massive heads of lettuce in her farmhouse kitchen. She’s always referring to her husband Russ, who I imagine is out in the garden doing the sweaty stuff while Marian follows behind with her big basket collecting the bounty. Marian makes beets sound so good I decided to grow them even though no one in my family including me likes beets at all. FYI: They do have pretty purplish leaves you can use in salad.
One of the funniest cookbooks (yes, funniest) is Being Dead is No Excuse by Gayden Metcalfe and Charlotte Hays.

Sandwiched around super-rich, cholesterol clogging casserole recipes are tidbits about small town Southern life. And death. My favorite story is about a Southern girl who left home and returns after many years for a funeral. She rolls her eyes at the table laden with cream of chicken soup soaked concoctions and says something snarky like, “who on earth brought that canned pea casserole?” To which her mother replies, “I did.” The girl, without missing a beat, grabs the ladle, plops a big helping on her plate and says, “And Mama, don’t you ever stop.”
Snark is not something you often find in a cookbook. So when you do come across it, it’s always fun. Take Joy of Cooking by Irma. S. Rombauer. Many Thanksgivings ago I was using the book as a reference and I came across this little passage:

Today “roasting” (turkey) in aluminum foil has become popular because no basting is needed. So, if you decide, despite our Cassandra warnings about this method, that you’d rather clean the attic, improve your serve, or write Chapter IX of the Great American Novel than to baby-sit a bird, go ahead with the foil and take the consequences—which will be steamed rather than roasted.

You can almost hear Irma muttering the word, Idiot, under her breath.