Long before there was Team Edward vs. Team Jacob there was Nancy Drew vs. Trixie Belden

Okay, I totally just made that up. That competition existed only in my mind. When I was growing up every girl I knew (who read) liked Nancy Drew, while I was firmly (alone) in the Trixie Belden camp. Trixie Belden, for those sadly out of the loop, was a mystery series published from the 1940’s into the 1970’s, when I discovered them.

Sure, I tried reading a couple of ND’s but she was too old, too perfect, too….boring. And I didn’t like her boyfriend Ned who reminded me of a Ken doll. Only more bland. And what was with her girl friends, Bess and George?

Trixie, on the other hand, was real. She was thirteen and outspoken and sarcastic. She struggled in Math and whined about chores. She didn’t like her looks, always complaining about her “unruly curls,” and enviously eying her best friend Honey’s shiny, sleek hair. She also sometimes salivated over Honey’s super wealthy lifestyle in the gorgeous mansion up on the hill. But she was smart enough to realize that Honey didn’t have it all, especially the stuff that counted, like cool older brothers and understanding, involved parents.

Yeah, it might be nice to own horses and have servants (sigh) but living on a farm wasn’t that bad. Even if you did have to dust the house and weed the garden and babysit for a bratty little brother.

Trixie Belden was a girl “sleuth” (does anyone actually use that word anymore?) who solved what my childhood self thought were complicated, thrilling mysteries. But what I really liked about the books was the world Trixie lived in. Late at night, curled under my covers, cursed with insomnia and anxiety, I’d open one of those books and disappear. There was loving Mom in the kitchen perpetually canning tomatoes (Trixie called her “Moms." I don’t know why.) And Dad coming home from his job at the bank and stretching out in the living room to read the paper (this was truly the Leave it to Beaver era, I guess, before Mad Men came along and showed us the dark underbelly of three-martini lunches and apartments for mistresses in the city).

I so much wanted Trixie’s friends. Two older brothers who teased her but would always defend her; loyal Honey; ditzy but sweet Di, and most important: Jim, the red-haired, “husky” orphan that Trixie saved in Book One.

Now that I think about it, Jim is probably the model for ideal manhood in my mind. Smart and resourceful and ambitious (he vowed to one day open a camp for underprivileged boys like him). Also strong and handsome and proud (too proud to ever take charity, thank you very much. If Jim wanted something, he was going to earn it, gosh darn it.) One of the highlights of my middle school years was reading (over and over) the passage where Jim gave Trixie his ID bracelet right after they’d solved a particularly complicated mystery.

Jim: You know what this means, don’t you?

Jim: It means that you’re my special girl, Trixie. As if you didn’t know that already.

My eleven-year-old self swooned.

I read every book in the series. Multiple times. For some reason they didn’t carry them at my local library, but luckily I had a generous aunt who would give me a Trixie Belden book or two every few months until I’d collected the whole set. I lost track of the books when I went off to college but one day years later I was in a bookstore in Lexington Kentucky and saw them lined up on a shelf. I am almost embarrassed to say that I burst into tears. I bought them on the spot. They’re lined up numerically, bindings cracked and torn, right now on the bookshelf in my office. 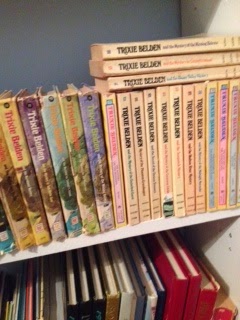 These are not the best-written books on the planet. Not classics like Charlotte’s Web or Anne of Green Gables. But something about them still draws me in. Maybe because Trixie’s world is so tied up in memories of my own childhood. She was a real person to me and the place she lived, Crabapple Farm, nestled in the Hudson River Valley, was real too.

When I pull one of them out and open it up (like I did to find the above passage, marveling that I knew just where to find it: last page of Number Nine Trixie Belden and the Happy Valley Mystery) all of it comes back. The adventures of Trixie and Honey and Jim.

And the anxious and day-dreamy little girl I was who believed that the world of a book was just as real, maybe more so, than the one I lived in.