Janet: Before the “next steps” there were the first steps. I researched for organizations that might help me with writing the book and was lucky to find the Society for Children’s Book Writers and Illustrators (SCBWI). Agents, editors, publishers all have respect for this organization and are more likely to pay attention to the writing of its members. That’s where I found my first critique group. And that’s where I found out that I had a lot to learn about writing for kids.

My first two (or so) books were my trial and error works—a crash course in what not to do. Through the help of my group, through critiques that I got at SCBWI conferences, and with help from other writer friends, especially my critique partner Augusta Scattergood, I finally finished a book that I thought might make it in the publishing world. That whole process took about 5 years. (I’m not counting the three of decades of writing for magazines I did for before that.)

It was also through SCBWI that I learned about researching for the right agent/editor. I subscribed to newsletters, read blogs, attended more conferences. It didn’t take long to figure out that the best route to publication would be through finding an agent. And the best route to finding an agent was to write a great query letter. Which led to more newsletters, blogs, etc.! This was a long process, but a necessary one.

When I found an agent or agency that I thought would be a fit for my book (one looking for teen, paranormal romance/mystery), I would check them out on Preditors and Editors. There are a lot of not-so-legit companies out there, and this site helps sort them out.

Finally the research was done, the query perfected, the agents targeted. Now came the hard part. The waiting. And I am not ashamed to admit (because I know we all do it) I checked my email every hour or so, starting about five minutes after I sent the first query.

Jody: Your long journey sounds a lot like mine, but then, finally, you got your book deal?

Janet: Get Psyched took several years to find a home, and it truly was a roller coaster ride. At first, everything went incredibly well. After I sent my first batch of query letters, I got two responses from interested agents. One really loved the book and offered me a contract. The thing is, when you get an agent, you assume the sale of the book is a done deal. Not so. Not for me, anyway. 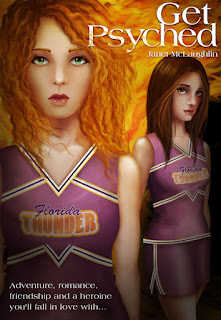 While I was blissfully waiting for Get Psyched to find a home, I started working on its sequel. But when I found out that my book wasn’t getting published after all, I descended into that mindset of “I stink a everything!” and stopped writing altogether. The pity party lasted about six months, but writing is so much a part of who I am.

Since I loved the characters in Get Psyched so much, and since I was convinced it would never see the light of publishing, I started a new book with the same protagonist and best friend.

Jody: You and I really do have similar journeys. When all else fails, write another book! How did things finally come together with Get Psyched?

Janet: To appreciate the synchronicity of what happened next, I need to tell you that Get Psyched takes place at a National Cheerleading Competition in a complex near Disney World. In early December, 2011 I was there watching one of my grandchildren compete. A woman was manning a booth, handing out magazines about cheerleading, and my husband, Tom-The-Promoter, who sees opportunity everywhere, told her about my work. It turned out that her company was looking for a book to launch their new business, Bookworm Publishing Company.

Voila! not long after, I was a published author. And it only took about eight years and six months!

I committed to doing a series with them, so I “dusted” off and finished the sequel to Get Psyched I had abandoned a few years ago. Psyched Out was released in late February of this year. I'm now writing the third book in the series, Fireworks, which is a rewrite of the novel with the "stolen" characters.

Jody: Tell me a little about your book deal.

Janet: I’m not sure I’d call my book “traditionally” published. But it’s not self-published, either. I didn’t get an advance, but I was okay with that. Bookworm was a new company and I was an unproven entity. But since we were willing to take a chance on each other, we adopted guidelines that suited and benefited both of us. I paid to have the books edited professionally, but they handled all the other expenses. They plan on adding an editor to their staff in the future. The royalties are equivalent to the professional norm.

When it comes to the technological end of things, I am, let’s say, challenged. Bookworm takes care of much of that end of the promoting. We work together on booking school visits and such. Getting your name recognized is a slow, tough, ongoing process. Having a company behind you, helping you, is invaluable.

Jody: Any thoughts on the future of publishing or what's going in the industry, as far as mergers, e-books, bookstore closings, etc., go?

Janet: I haven’t a clue. I do know from the feedback I’ve gotten since my books have been published that there are people who prefer to read on their electronic devices and those who prefer hard copies. I’m one of the latter. So I’m hoping that print books will always be available. But I have to admit. There are times when I want a book, and I want it now! That’s when I appreciate e-books.

But that’s an adult speaking. My books are for ‘Tweens, and more of them don’t have Kindles, et al, than do. So print copies are essential for my audience. But I’m thinking that will change soon. I’ve seen one-year-olds more adept at handling IPads than some adults I know.

Currently, my books are available on Amazon and Barnes and Noble's websites, but I’m okay with that. As much as I like brick-and-mortar stores, more and more people are buying via the internet. Not only is it fast and simple, it makes gifting so much easier.

The publishing industry is changing. It has to. The world I see today is enormously different than the world I grew up in. And I believe it’s only the beginning. I’m an optimist. I think, after a couple of decades of adapting to our exponentially changing world, our lives will be richer and the better for it. There has to be a novel in there somewhere, don’t you think? 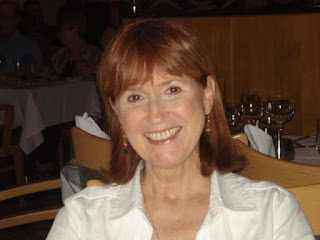 Janet McLaughlin is a writer, editor, and teacher. Her first novel is Get Psyched, a tween paranormal mystery. You can find out more about Janet by visiting her website:   www.janetmclaughlinauthor.com

When one door closes…

Shortly after I did this interview with Jody, my publishing life took a different route. My publishers and I decided to part ways due to “irreconcilable differences.” The dispute was over terms in the contract that were not spelled out. It was a matter of interpretation of a couple of words that impacted on the bottom line for both of us.

Am I upset? Not really. I learned a lot from this relationship. And I also got a lot of satisfaction out of it, too. They still believe in the books, as do I. They helped me get readers that I might not have reached otherwise. And I now have the confidence to continue my journey as an author. I just have to choose the right path.

I believe that everything happens for a reason. I am energized and ready for the next challenge. Self-publish? Seek representation? Go directly to the source, i.e. publishing houses? The only limits are the ones I place on myself.

I can feel it already. Another door opening…

Email ThisBlogThis!Share to TwitterShare to FacebookShare to Pinterest
Labels: Get Psyched, How to Publish a Book 101 Blog Series, Interviews, Janet McLaughlin, pathways to publication, Psyched Out