Jen: When I knew I wanted to write for children and teens, I did a little online research about children’s publishing and that quickly led me to the Society of Children’s Book Writers and Illustrators. I joined the New Jersey chapter of SCBWI and began attending their wonderful conferences, which offered would-be authors like me the opportunity to get my manuscript critiqued by agents, editors, and other aspiring authors.

I met three writers I really connected with at one of the first conferences I attended in Princeton, NJ. Though we lived in different states, we kept in touch and eventually formed an online critique group. Their input was invaluable in helping me to shape those early drafts.

Jody: How long did it take from finished book to publication? Was all this wrinkle free? Or were there setbacks along the way?

Jen: It took approximately five years from finished draft to publication and “no” this process was not wrinkle free, but it was worth it! The first novel I wrote was acquired by an editor at Henry Holt Books for Young Readers. One year into the revision process with that editor, she left Henry Holt for another publishing house. Thankfully her boss wound up taking on my book, but the change in editors delayed my publication date for more than a year.

Jody: Yikes! That is a wrinkle! But I'm assuming you had an agent to help you navigate?

Jen: Yes, I have an agent. I would seriously recommend that anyone with a finished, polished manuscript, who is seeking to publish through the traditional route, should focus first on finding an agent. I’m represented by the amazing Kerry Sparks of Levine Greenberg LLC. I began my search for an agent by querying agents who attended the NJ SCBWI conferences I attended. In 2009 I attended the Rutgers University Council on Children’s Literature (RUCCL).

Jody: I've heard of that Rutgers program and you aren't the only writer I've interviewed who's attended it. Tell me a little more about it.

Jen: Well, it's an amazing annual conference that offers writers who get accepted a one-on-one critique with an agent or editor mentor. I did not get paired with my agent that day, but she was one of the mentors at the conference. After the conference, attendees are given a certain amount of time to query the agents and editors who attend RUCCL. After reading her bio, I realized that my manuscript seemed to match her tastes. I queried her, she requested my full manuscript, and she signed me shortly thereafter. Three months later, she sold my first young adult novel! 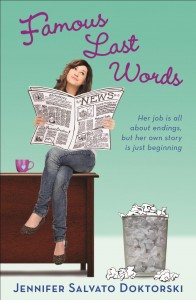 Jody: What exactly does your agent do for you (besides sell a manuscript in 3 months!)?

Jen: What doesn’t Kerry do for me? She reads my manuscripts, even when they’re in that icky first-draft stage, offers me editorial guidance and advice, helps me whip my pages into shape, and submits my finished manuscripts to editors. She answers my questions about contracts, the publishing process, marketing, you name it! And sometimes, when edits or reviews get me down, she has to talk me down from the ledge. I recently sent her a mug that says “1/2 Literary Agent, 1/2 Rock Star.” That about says it all.

To date she has sold both my novels which were recently published. How My Summer Went Up in Flames was published by Simon Pulse on May 7, 2013 and Famous Last Words will be published by Christy Ottaviano Books, a division of Henry Holt Book for Young Readers on July 2, 2013. Kerry made me a published author. What more could I ask for? 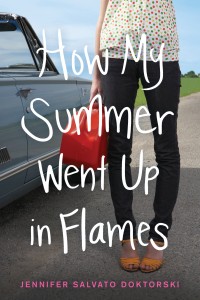 Jody: Two book releases in one year is awesome. What's the back story of those two deals?

Jen: For both books, I received an advance. Each time, half the advance was paid when I signed the contract, the other half was paid when the edited manuscript was delivered and accepted by my editors. Hopefully sales of both books will be healthy enough to “earn out” those advances (i.e. pay back, sort of) at which point I will begin earning a royalty on the sales.

Jody: And you had revision work to do on those two books.

Jen: Right. At some point after the initial sale of my books, I, like most authors, received an editorial letter from my editors. These letters are often quite lengthy and can address any number of suggested edits, from character, to language, to plot and pacing. The letter may include big picture ideas as well as more specific line edits. Some editors may require one or two rounds of these types of edits before moving on to copy-editing. Somewhere between the copy-editing and proofreading phase, writers will received a set of first pass pages. Those pages get several pairs of eyes including yours and your editor’s.

Editors read and re-read your manuscript many, many times between acquisition and publication. As a writer, I came to understand just how deeply an editor needs to fall in love with your work in order to consider acquiring it.

The first pass pages are used to produce a galleys or advanced reader copies (“ARC”) of the book. Galleys sometimes look pretty close to what the finished book will look like. Sometimes, the cover and interior pages get re-designed. Publishers send ARCs to bloggers, librarians, etc.-- key people who offer early reviews and help get the word out about your book. Of course I, like many authors, took on some of these responsibilities too. It’s in your best interest to make connections with fans of the type of book you’re working on.

Jody: What other marketing and publicity stuff have you been doing?

Jen: I contacted my local newspapers, my alumni magazine and college newspaper, and regional magazines trying to get the word out. I dropped off ARCs at local independent bookstores, which resulted in scheduled appearances at two of them. One of the bookstores will be putting me in touch with a local radio station for an interview. I also cobbled together a mini-blog tour by reaching out to YA bloggers I had connected with both in the US and abroad. I ordered several thousand bookmarks, which I dropped off at local and school libraries and mailed to bloggers, librarians, reviewers and anyone else who request them. I continue to use social media to get the word out and try my best to keep the information fresh.

Jody: That sounds like a lot to do, and all of it multiplied times 2. Do you ever see yourself going the self-publishing route?

Jen: I'm not sure. I would never rule it out. But one of the biggest benefits of publishing traditionally is in the quality of the product. Both my editors pushed me to elevate my manuscript to a higher level. After going through the rounds of editing I described above, I knew my book was much better than if I had published it on my own. That being said, I think for those who do go the self-publishing route, there are many reputable editorial consultants and freelance copy editors out there who could help you polish your manuscript before you send it out into the world. 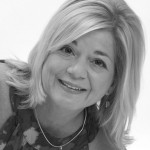 Jennifer Salvato Doktorski is a freelance writer who has written articles and essays for national publications including, Cosmopolitan. Her debut young adult novel, How My Summer Went Up in Flames, called "A great ride,” by Booklist, is out now. Famous Last Words, a YA novel about a teen obit writer, will be published by Henry Holt Books for Young Readers in July 2013.

You can learn more about Jen on her website www.jendoktorski.com

Email ThisBlogThis!Share to TwitterShare to FacebookShare to Pinterest
Labels: Famous Last Words, How My Summer Went Up in Flames, How to Publish a Book 101 Blog Series, Interviews, Jennifer Salvato Doktorski, pathways to publication