Jody: You wrote a book that you felt was worthy of publication—what were your next steps?

Holly: A bit of backstory: when I graduated with my master’s, I dove headfirst into writing.  I’d already published a few pieces when I was in grad school, actually: poetry, short fiction, literary critique.  I was under the grand delusion that publishing a book would be no sweat!  When I’d finished my first book-length manuscript, I began submitting it in much the same way I’d submitted my shorter pieces: I used writer’s guides to see who was open to unsolicited manuscripts, I checked out what they were publishing (to find out if my manuscript was in the same vein), and I queried.  And queried.  And queried…

Jody: And that led to a book contract eventually?

Holly: No! That first book-length manuscript was never published.  I had a few nibbles, no takers.  But while I was waiting for the response to my submissions, I drafted other novels.  And I began to send out queries for those books.  Pretty soon, I was juggling several different books, all in different stages of completion.

A couple of years or so into the pursuit of publication, I started teaching music lessons.  It was the perfect setup: I’d write all day, until the kids got out of school in the afternoon.  When I started teaching, I was amazed at how similar those kids were to the kids I’d known in school—the fashion and the technology had changed, but the struggles hadn’t!  So I tried my hand at writing for kids.  My first published novel turned out to be a YA.

Jody: So how long did it take from when you first started submitting to that first book deal?

Holly: All in all, it took seven and a half years—and more manuscripts than I can count—to get that first acceptance.  I also took personalized rejections seriously, and worked to revise my manuscripts and resubmit to editors who were willing to take a second look.  I don’t know the exact number of rejections, but it was well over a thousand.  I received over eighty rejections for my debut, A Blue So Dark.

Jody: That's a lot of rejections. But the perseverance paid off.

Jody: That's true. And then in addition to writing, as you've said, there's the business end to this--the querying, the researching, the tallying rejections. Do you have an agent?

Holly: I actually sold my first two YAs myself, but I do have an agent now.  I got my agent the same way I got my first editor: direct submission using a query letter.  I’m a big, BIG fan of the query letter.  Most valuable piece of writing you can master.  NEVER underestimate the power of a good query.

I really love my agent—she’s placed my debut MG, The Junction of Sunshine and Lucky, with Dial, and my next YA, Feral, with HarperCollins.  But it’s more than that—she’s given me so much fantastic career advice.  I’ve been with her now since ’09, and anytime I have a question or concern, I grab the phone and call her up.  It’s incredible having someone in the business that you can talk to like that, who’s on your side…

Jody: Explain a little about your book deals.

Holly: My books—both published and forthcoming—have all been with traditional publishing houses.  The first two were with a smaller house, and my forthcoming books, as I said before, are with larger houses…

If I could go back and talk to unpublished me, I think I’d tell her how much editorial work is done after acquisition.  Usually, global edits are required—we’re talking changing events, adding or dropping characters, switching up the POV…major, MAJOR changes.  And so far, my global rewrites have usually had to be completed in about a month’s time.

That’s not to say you won’t be asked to do ANOTHER round of major rewrites when those are finished.  You may very well have to.  Again, in about a month’s time.

Jody: But you had that long stretch when you were submitting and getting rejections to practice!

Holly: That's right. I often think the greatest thing that happened to me was that seven-and-a-half-year stretch of time before my work was accepted.  As time went on, and I received personalized rejection, I learned how to interact with editors.  I emailed them as we talked rewrites—one even called so we could discuss the book in more “real time” over the phone.  And I learned how not to get freaked out by doing an inordinate amount of work in a short period of time.

Actually, I like the challenge of a fast write.  I give myself crazy deadlines even when I’m drafting new work, to push the book along.

Jody: Last question, Holly. Any thoughts on the future of publishing?  Do you see any of these issues as affecting you now, or in the future?

Holly: Wow, that’s a heavy one.  Like most anyone in the publishing industry, I don’t really have an answer.  A few years ago, I would have told you I’d never buy an e-reader.  But I’ve got one.  When I started writing, I used a real dinosaur of a computer—didn’t even have a modem.  I had no use for the distractions of the Internet.  Now, I can’t imagine not being to interact with bloggers and readers via Twitter, Skype, Facebook, my own blog.

I think as a writer, you have to be open-minded…The publishing world will always be in a state of flux.  You just have to learn to change along with the changing times. 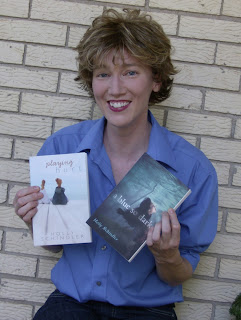 Holly Schindler's debut literary YA, A Blue So Dark, received a starred review from Booklist and was named one of Booklist’s Top 10 First Novels for Youth. She's also the author of the YA Romance Playing Hurt, the forthcoming middle grade The Junction of Sunshine and Lucky, and the YA psychological thriller Feral.

A lover of all genres, Schindler also writes for adults, and can be found working on her next novel in her hometown of Springfield, MO.  Check out Holly online at HollySchindler.com.

Email ThisBlogThis!Share to TwitterShare to FacebookShare to Pinterest
Labels: A Blue So Dark, Feral, Holly Schindler, How to Publish a Book 101 Blog Series, Interviews, pathways to publication, Playing Hurt, The Junction of Sunshine and Lucky