Joy: By the time I finished the book that would become Dreaming Anastasia in late 2005, I was already a member of SCBWI and a critique group. I'd gone to a couple conferences and had been working seriously toward publication. I also was a regular on the 'Blueboards' at Verla Kay's site. Between all that and regular blog reading of newly published authors, I understood that I needed to query agents. Which is exactly what I started to do. 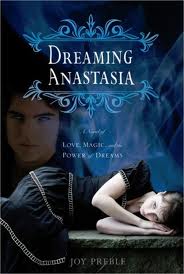 Jody: I'm embarrassed to say I never heard of Verla Kay's site and just now checked it out. What an awesome resource for writers and illustrators! So you had your Dreaming Anastasia manuscript and you knew you needed to look for an agent, what was that process like?

Joy: Well, it was not wrinkle free! The first batch of agents I queried in the fall of 2005 resulted in a bunch of rejections, but one wrote a personal note that said, "You have something here. It's not quite ready, but..." She did not ask to see it again, but I knew that if I worked a little harder, she might be right. I queried my second batch of agents on Super Bowl Sunday in early February of 2006. And it was from that group that I got two requests for partials and then fulls and eventually received an offer of representation from Michelle Andelman, who was then with Andrea Brown Literary. (Later, Michelle would move on and I am now repped by Jennifer Rofe, also of ABLA)

Michelle and I revised the book for a number of months and eventually in 2007, it sold to Sourcebooks, as the first book in their yet to be launched YA imprint. Many things happened after that: As mentioned, I ended up with an agent change. My acquiring editor at Sourcebooks left and I landed with a new editor. The new Fire imprint launch was delayed and in fact Dreaming Anastasia was finally released in September 2009, but the FIRE imprint didn't launch until March 2010.

Jody: Quite a few wrinkles and a good four years from finished manuscript to publication, but it all worked out in the end?

Joy: Oh yes. Dreaming did well! I was thrilled!

Jody: You've talked a bit about your agent, Jennifer Rofe.  What exactly does she do for you?

Joy: All agents are your business partners. They negotiate your book deals, they cheerlead, they help build your career. They make the connections that you could not otherwise make yourself. There's a lot of press these days on self-publishing, particularly e-pub of New Adult titles. But I am a strong proponent of being agented.

Jody: And your agent seems like she's hands on when it comes to revision.

Joy: Yes. She's an editorial agent, which I prefer. We both work together to make sure that the manuscript that goes out to editors is the strongest it can be.

Jody: You mentioned self-publishing and I know your books are traditionally published. Tell me a little about how a book deal works when you have signed on with a publisher.

Joy: As I mentioned The Dreaming Anastasia series is published by Sourcebooks. My new The Sweet Dead Life series is from Soho Press, as is the anthology I'm in. This means that I received an advance and that I also receive royalties once books earn out, as well as $ from foreign rights and film and audio and all the usual stuff. In all cases, I received half the advance upon signing the contract -- 15% of which goes to my agent, which is a standard figure and well-earned! The other half comes when I've turned in the final copy on time. Earning out means that you have sold enough books to earn back that advance.

So for ease of math, let's say that you received a 10k advance and your book will be a trade paperback selling for $10 per copy and that you get a 10% royalty rate on each copy--that means that you would need to sell at least 10,000 copies to start earning royalties. 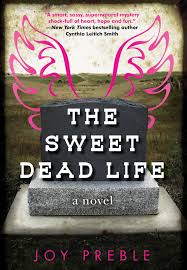 Jody: What about when it comes to marketing and publicity? What do your publishing companies do? And what aspects of promotion are your responsibility?

Joy: All authors other than a rarified handful and even some of them, participate heavily in the publicity end -- through social media such as Facebook, Twitter, blogging, as well as book events including signings, conferences, panels... Both my publishers have always served as the go -between for many events. They pitch me to festivals, send press kits, do extensive marketing and promotional work, spend coop money at the chains and other places, place ads in places like PW newsletter, contact newspapers and bloggers and librarians. They create covers and often bookmarks and other physical materials.

I work with brilliant editors who are dedicated to creating the best books possible with me. The list goes on and on. Everything you see in a bookstore: books facing out, end caps, special features-- by and large they are arranged by publishers. (Of course this doesn't count my in-law Pennie, who has made it her mission to face my books out in every bookstore in the LA metroplex. Shh.... don't tell anyone. She also likes to move one copy to sit by whatever the heavily featured book is. ) So I think the benefits of working with a publisher are huge. Certainly there are some self-pub success stories out there like Amanda Hocking and Colleen Hoover. If you want to be your own business totally and completely, then fine. I do not.

Jody: Can you put me in touch with your Aunt Pennie? Seriously, though, any thoughts on the future of publishing or what's going in the industry, as far as mergers, e-books, bookstore closings, etc., go? Do you see any of these issues as affecting you now, or in the future?

Joy: Truth? I think there will always be books-- physical books in addition to other platforms. Publishing is being careful not to go the way of the music industry, which put its head in the sand way back when with Napster (do you remember Napster?!) and tried to pretend that people wouldn't want to share music files! Well, you see how that worked! Not.

It's funny, but if you watch that old Tom Hanks/Meg Ryan movie, You've Got Mail, not only do you get to nostalgically hear the dial up noise, but you also see the exact opposite of what's happening today! In 1998, the big move was for the huge chains to eat up the indies. Now, the indies are honestly thriving, more and more every day. We have not lost our need for a real live place to meet and share our love of books, meet with authors we love and new authors we want to get to know. Here in Houston, we have some amazing and thriving independent bookstores: Blue Willow Bookshop, Murder by the Book, Brazos Books and others. They are run by brilliant and dedicated booklovers who handsell titles, including my own, and create a space for artistic dialogue to occur. So I am very hopeful about the future of the book!

Joy Preble, is a former English teacher and the author of the Dreaming Anastasia series, which Kirkus calls a "well-paced roller-coaster ride of death-defying magical encounters." Her new novel, The Sweet Dead Life, is out now with Soho Press.

You can find out more about Joy on her website www.joypreble.com